"Something Happened in Our Town" at Children's Theatre Company 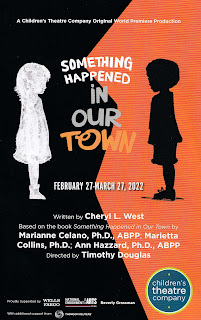 Something happened in our town. In May of 2020, while we were in the early days of a terrifying, deadly, and isolating pandemic, a Black man by the name of George Floyd was murdered by police on a public street with the world watching. As if this were the last straw in years, decades, centuries of discrimination, prejudice, and violence against Black people, our town erupted. The world erupted, with generations of pent-up frustration at injustices. It was, and still is, hard to process that as an adult. I can't imagine what our children felt and are still feeling. The Children's Theatre Company saw this need and commissioned playwright Cheryl L. West to adapt the children's book Something Happened in Our Town, written by three child psychologists in 2018, into a play. This story of two families, one Black and one White, and how they and the children's friendship were affected when a Black man was killed by police, offers a straight-forward and hopeful look into these issues, if a bit simplistic and heavy handed at times. Something Happened in Our Town continues through March 27, and while it may not be as fun as Annie or the upcoming Diary of a Wimpy Kid, it's a useful tool (along with lots of helpful dramaturgical info in the program) for parents and children to discuss and process what's been happening in our town over the last two years.We meet neighbors and best friends Emma (Lola Ronning), an eccentric White girl who doesn't quite fit in, and Josh (De'Anthony Jackson), a nervous and studious Black boy. They love to jump on Emma's trampoline, and their biggest worries are missing the bus, homework, and the mean bullies at school. All that changes one day when a Black man is killed by a White cop. Josh's parents (Rajané Katurah and Kevin D. West) are understandably worried about his safety, and particularly that of his older brother Malcolm (Calvin Zimmerman), who wants to join in on the protests. Josh is forced to pull back from Emma, and she doesn't understand why. She feels conflicted about her beloved uncle Manny (Dean Holt), a cop, and can't reconcile what people are saying about police and who she knows Manny to be. Emma's single mom (Autumn Ness) and Josh's parents, who had a tenuous friendship before the event, are also at odds. Conversations happen between parent and child, between kids at school, between adults, which are hard and uncomfortable and unsatisfying. Nothing is really resolved, but with the simplicity of a children's story, the community finds a way to come together and work towards a more equitable world. If only it were that easy. But it's something to aspire to, and it's important for kids to see people disagreeing, talking about difficult issues, and making up.With direction by Timothy Douglas, the adult and child casts do a great job of navigating these tricky discussions, making their characters fallible, vulnerable, and human. The kids (also including Zachary Bagnoli, McKinley Fant, Ines Rose Mojica, and Geoffrey Morrison) are especially impressive as they carry scenes on their own and explore some rough territory. Junghyun Georgia Lee's set features a backdrop of tiny colorful houses against a black and white cityscape. We often see the two families side by side, the backdrop of Emma's house featuring bright eclectic décor, Josh's family's home showcasing Black art. Other set pieces roll in and out smoothly, and characters are dressed in casual chic character defining costumes designed by Trevor Bowen (including Emma's rainbow, tie dye, and other artfully mismatched patterns).

Something Happened in Our Town does not provide easy answers, because there are no easy answers. All of the characters in the play make mistakes and unfair assumptions as they bumble their way through this situation, but they all have good intentions and begin to open up. This play demonstrates that when you interact with someone from the "other" group on an individual level, you begin to see them as human rather than as part of some foreign misunderstood group, and realize that what brings is together is so much greater than what drives us apart. Maybe the way to begin to heal the centuries old ever bleeding wound of racism is through one-on-one conversations and friendships.