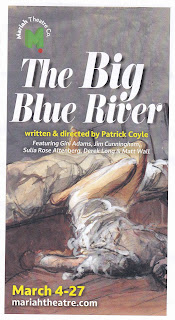 It's great to welcome in a new #TCTheater company, after we've lost too many in the last two years. Theater and film actor/director/writer Patrick Coyle is debuting his new company, Mariah Theatre Company: "a boutique theatre company in St. Paul, MN producing world premieres with a mission to produce work that honestly depicts issues of mental health, suicide awareness, and addiction." Patrick wrote The Big Blue River before and during the pandemic. It's a funny, quirky, poignant play about a woman looking for connection, something probably everyone can relate to after the isolation of the recent past. He's assembled a fantastic cast of local actors to bring his story to life in the intimate space of the North Garden Theater in St. Paul's West 7th neighborhood.

Despite the note in the program, it took me a minute to realize that many of the scenes in the play take place in the imagination of our protagonist Laura, a therapist by day who's writing a screenplay. She sees one of her patients at a drag show, and imagines a whole life for him, complete with cheating wife and spirited young adult daughter. In a way she's using her writing to work through her own issues of loneliness, depression, grief (her mother died by suicide when she was young), and a sense of feeling lost. Which is I guess what art is; the artists processing their experiences and the world around them. Laura plays with different styles in her writing. Some scenes are straight drama, some a sitcom complete with laugh track, some film noir, and we even see a film clip played on a screen at the back of the stage. In one surreal scene, all of her characters meet and talk about her. She eventually decides to tell her patient that she's been writing about him, which doesn't go over well at first, until she eventually finds the connection she's been looking for.

The playwright also directs, with a nice mix of comedy and drama, effectively exploring the different styles of storytelling. Gini Adams plays the therapist, and also her patient's wife in the fantasy scenes, which allows her to express the full range of emotions as these two different and complex women. The strong supporting cast includes Sulia Altenberg, Jim Cunningham, Derek Long, and Matt Wall.

The North Garden Theater is a versatile space; it's basically a big empty room. For this show, the stage is set up at the far end, with a curtain in the middle separating the bar area with tables from the theater seating. Laura's office is on one side of the stage, her patient's home on the other, with images and videos projected onto the center to indicate other locations (set design by Vanessa Miles). The show would have been a nice tight 90 minutes no intermission (my and Jack Reuler's four favorite words in theater), if not for the intermission.

The Big Blue River continues through March 27, a promising debut for a new #TCTheater company (click here for info and tickets).