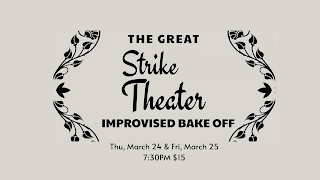 The Great Strike Theater IMPROVISED Bake Off is back! The last time I was at Strike Theater was for the 2019 holiday Bake Off. After a very long intermission, Strike opened its doors again last year for sketch comedy, storytelling, and spoken word shows and classes. And this week my favorite show, the delightful spoof of everyone's favorite TV baking competition, returned for two performances only. Click here for more info on Strike's upcoming shows and classes, and read on for more about this episode of the Bake Off.
Every baking show needs funny/awkward hosts, and this Bake Off couldn't have chosen better than Nimsy and Pippa (aka Rita Boersma and Shanan Custer, a comedy/improv dream team). They were joined in the tent this week by cookbook author Sir Teddy Crouton, whose first book is titled Hard Things in My Mouth (setting up lots of double entendre jokes throughout the show). They banter amongst themselves and with the bakers, all in silly British accents.
The theme for this week was "British stuff," including a signature bake that the bakers brought in, and a showstopper created right in front of us - a bust of the Queen. Baker Meadow (Heather Meyer, who has a Facebook/Instagram persona Cooking Heather dedicated to creating the most horrifying and amazing treats, making her perfect for this show) made a couple of elaborate and colorful cakes - a signature bake dedicated to the Spice Girls, and a showstopper yellow cake because the Queen is like the sun (or something). Baker Evelyn (a dryly funny Jim Robinson) went with more subdued and traditional cakes (with obscure British references), finishing with a showstopper "Brexit cake" (containing nothing European, and also no vanilla).
The bakers each begin at a table filled with baking staples, as well as items they brought in. Watching their process, I was a bit surprised when they put their cakes into convection ovens (which may or may not have been on at any given moment) and it began to smell great (the tantalizing combination of sugar, butter, flour). They explained their bakes to the hosts as they were busy preparing and mixing during Act I, and Nimsy drew a little cartoon representation of the planned cake. They continued working during a brief intermission and into Act II, as the cakes came out of the oven and the decorating began (with everything from egg shells to runts). While this was going on, the hosts took a call from the Queen (voiced by Mike Fotis, co-creator/director of the show with Shea Roberts Gyllen), and interviewed a previously eliminated baker (the always hilarious Lauren Anderson). But the best part is when the cakes are done, and the hosts bravely consume what is put in front of them. Edible, mostly. Tasty, sometimes not so much (vegemite!), sometimes surprisingly so.
Check out Strike Theater, your Northeast Minneapolis home for sketch comedy, spoken word, and storytelling. Visit their website or follow them on Facebook for notification of upcoming shows, including the next time we gather in the tent for this ridiculous and wonderful show.