"Orlando" by Theatre Pro Rata at the Crane Theater 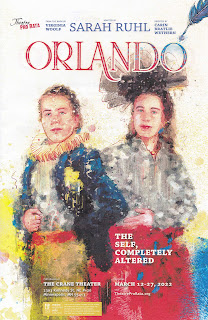 Although based on a 1928 Virginia Woolf novel and adapted into a play around the turn of this century by Sarah Ruhl, Orlando speaks very much to this time, with its exploration of gender fluidity, and it's skewering of societal norms around gender identity and gender roles. Written in a modern narrative style, with the ensemble taking turns describing the story as it plays out, there's a playfulness to it despite the seriousness of the ideas presented. Theatre Pro Rata has assembled an excellent cast and team to bring the complex, modern, insightful story to life at the Crane Theater (through March 27, click here for info and tickets).
Orlando's whirlwind epic tale begins in the 16th Century, when he's a young poet and favorite at Queen Elizabeth's court. We follow his romantic escapades and failed writing attempts, until one day, Orlando wakes up completely transformed into a woman, yet in all other ways the same. She takes it all in stride as she soon learns the power and limitations of being a woman in this world. Centuries pass as Orlando continues looking for love, inspiration, and fulfillment.
Artistic Director Carin Bratlie Wethern directs the play with lightness and humor, but also moments of poignancy. Courtney Stirn gives a wonderful performance in the title role, as they navigate Orlando's longing, heartbreak, and triumphs through changing time, space, and gender. Everyone in the eight-person ensemble (Ankita Ashrit, Amber Bjork, Rachel Flynn, Ninchai Nok-Chiclana, Nissa Nordland Morgan, Michael Quadrozzi, Emily Rosenberg, and Andrew Troth) is delightful, each playing one or two featured roles, and otherwise ever present as a chorus of storytellers, deftly trading lines of Sarah Ruhl's quick and clever dialogue back and forth among them.
The set consists of a massive two-dimensional oak tree that reaches into the rafters of the Crane Theater, with pages of a book tacked all over its branches like leaves. Just a few versatile set pieces comprise the rest of Orlando's world. The ensemble is dressed in fun and colorful Renaissance Festival fair, while Orlando's costumes change with their gender and the changing centuries, from wide Elizabethan skirts, to elegant Victorian style, to a flapper dress, all in rich shades of red. (Set design by MJ Leffler, costume design by Mandi Johnson.)
Orlando is another excellent choice by Theatre Pro Rata to speak to today's world, exploring gender fluidity, gender norms, identity, creativity, and the evolution of time (check out the excellent play guide compiled by dramaturg Gina Musto for more historical and sociological context).