"Parks: A Portrait of a Young Artist" at History Theatre 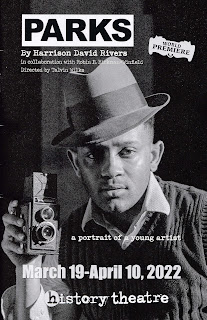 When I saw a reading of the then-titled The Gordon Parks Play Project three years ago, I wrote: "Friends, this is one of those experiences that transcended theater." When the reading is that good, and the playwright is one of #TCTheater's most talented and prolific, Harrison David Rivers, adding in acclaimed director Talvin Wilks, you know the finished product is going to be something special. Parks: A Portrait of a Young Artist, which has finally opened at History Theatre, is just that. Beautifully written, directed, and acted, with evocative images, well-chosen period songs, and an almost constant underscoring of music, Parks traces the origin of photographer, musician, and filmmaker Gordon Parks during his decade or so living in St. Paul as a youth. Once again his great-niece Robin P. Hickman-Winfield, a collaborator on the piece, was in attendance and spoke before the performance I attended, and it's clear that Gordon's legacy of Black artistry lives on in her, the students at Gordon Parks High School in St. Paul, and any other Black youth who picks up a camera, or a paintbrush, or a pen as their weapon against racism and injustice.
This play had me from its opening moments, in which the great James A. Williams speaks the poetic and poignant words of Harrison David Rivers, with gorgeous piano underscoring, against a backdrop of a hauntingly beautiful video of pigeons flying. Pigeons are a common theme of the play, a metaphor for something or someone that the world views as a nuisance, or ugly, or worthless, but when allowed to soar in flight, can be quite beautiful. James A. Williams begins to tell Gordon Parks' story, who is often called simply Parks, as a sort of narrator, or older version of the character, always on stage or sitting in the front row watching the story play out. The younger Parks is personified by Kevin Brown, Jr., a talented young #TCTheater newcomer who imbues the character with such humanity, strength, despair, and hope. We watch as Parks leaves his Kansas home at 16 when his mother dies, living with an older sister in Minneapolis and her not very welcoming husband. He soon ends up on the streets, but finds a job, education, and community, all while battling racism and discrimination. He eventually decides to turn his creative and artistic talents towards photography, and the play ends at the beginning of Gordon Parks' life as an artist. The rest of the story is told through his own work - photographs, books, poems, films - a life in which his "choice of weapons" (as he titled one of his autobiographies) is his art.While Kevin gives a star performance as Parks, this is a wonderful ensemble piece, in which each member of the six-person ensemble (Pearce Bunting, Darius Dotch, Ivory Doublette, Darrick Mosley, Mikell Sapp, and Monica E. Scott) plays multiple characters, sings, and is onstage for much of the show. It almost has a devised theater feel, with everyone taking equal part in the storytelling, which is probably largely thanks to Talvin Wilks' direction. It's a great ensemble, but Monica deserves a special kudos. She was a last-minute replacement when I saw the show (so last-minute that they held the show for 10 or 15 minutes to give her more time), and gave a fully rounded performance despite holding a script (which you can see in the photo), nearly bringing the house down with her impassioned performance of "We Are Climbing Jacob's Ladder." Understudies truly are the unsung heroes of live theater, never more important than now.

The use of music in this piece is really lovely, and adds so much to the storytelling. It's not a full musical, rather a play with music, with well-chosen songs sung by the cast at opportune moments - a funeral song, a train song, an inspirational song. Music director Darnell Davis accompanies the cast on piano, and also provides an almost constant soundscape. I don't see a credit for original music or a songlist, so I'm assuming all the songs were previously written, some of them recognizable and all of them appropriate to the moment in the story. At one point I wondered, why are they singing the silly children's song "There's a Hole in the Bucket?" But I began to realize, as Parks gets more and more frustrated, that this song is a metaphor for the experience of many Black Americans; just an endless loop of trying to survive and succeed in a world that's stacked against them. That's how thoughtful and well put together this show is, every moment, even seemingly silly ones, have meaning and power.

It's been a while since I've seen a rotating stage at History Theatre, and it's well used here to create a feeling of dynamic movement. At the back of the circle is a porch, with stairs leading to a screen door. As the circle rotates, different spaces are created for the scenes. An onstage piano (not actually played - the pianist sits just off stage) turns around to become a bar or counter. Three huge screens display images and video, both beautiful photos of Black people throughout history (presumably Parks'), and abstract videos that evoke a certain feeling. One screen is occasionally moved forward to create a backdrop for some scenes, with some cool scrim effects. It's all beautifully put together, with seamless scene transitions accompanied by music. The unobtrusive '30s era costumes help with a sense of time and place. (Scenic design by Seitu Johnes, video design by Kathy Maxwell, lighting design by Merritt Rodriguez, costume design by Sarah Bahr.)

Parks: A Portrait of a Young Artist shows us the importance of art, as a means of expression, as protest, and as a way out of a dark situation. Continuing through April 10 at History Theatre in downtown St. Paul.