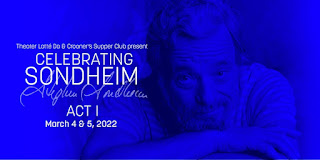 A memory popped up on Facebook this morning from 12 years ago: "Stephen Sondheim is a genius. I saw him tonight in a sort of Q&A, and I felt like I should have been taking notes. It was like taking a class in musical theater from one of the masters of the form." Even though I didn't take notes, I did write down what I remembered afterwards, and later that year when I started Cherry and Spoon, I posted it (you can read it here). This is a timely memory because last night I had the pleasure of watching a Sondheim cabaret by my favorite interpreters of his work, Theater Latte Da.
In the last 15 years or so I've seen a total of 26 productions of 8 different musicals for which Sondheim wrote music and lyrics, which is only half of what he's written (my first: Sweeney Todd on Broadway in 2006). The most frequent company I've seen do Sondheim is Theater Latte Da (Company, Into the Woods, Sweeney Todd, Assassins, and A Little Night Music). As with everything they do, Artistic Director Peter Rothstein and co. put their own unique spin on it, with great thoughtfulness and attention to detail, that somehow brings a new relevancy to the piece, while still remaining true to its original intention and heart. Sondheim's death last fall was an immeasurable loss to the music-theater world (he was still writing at the age of 91), but the good news is we have volumes of his words and music to explore, and I think we'll be seeing a lot more of it in the near future. The first of which is Act I of Celebrating Sondheim, a sold out cabaret show at Crooners Supper Club (Act II coming in May and also sold out). Friends, if you can beg, borrow, or steal a ticket to this gorgeous and life-affirming show - do it.
The show was beautifully curated and directed by Peter Rothstein, flowing seamlessly from one song to the next, from light-hearted comedy to gut-wrenching drama. The beauty of music-theater in general, and Sondheim in particular, is that every song is a little story unto itself, and these seven performers (with music direction and piano accompaniment by Barbara Brooks) told them expertly, in solos, duets, or larger groups. Vocally and emotionally, this ensemble brought new depths to these 18 songs from 12 different shows (see songlist below). Highlights include Liz Hawkinson opening the show with "Take Me to the World," rising star Janely Rodriquez's "Another Hundred People," Phinehas Bynum's charming "Giants in the Sky," #TCTheater veterans Michelle Barber and Tod Petersen giving us the full range from comedy ("Ladies who Lunch" and "Broadway Baby") to great emotion ("Losing My Mind" and "Sorry - Grateful," respectively), and Sasha Andreev and Brita Ollmann closing the show with a few selections from Sunday in the Park with George, roles I believe they understudied in the Guthrie's stunning 2017 production.
Peter gave a really lovely opening speech about what Sondheim means to him, and I think everyone on that stage, and likely everyone in the room, would have their own unique story. For me, no one brings such complexity and depth to music-theater, my favorite artform. I usually have to see or listen to a Sondheim show several times before I really get it, and I discover greater meaning and connection with each new experience. Even though Sondheim has left us, his music never will, and I look forward to experiencing more of his work through #TCTheater productions in the coming seasons.
While this show is unfortunately sold out, Theater Latte Da has two more productions in their 24th season, performing at their Northeast Minneapolis home, the Ritz Theater. The area premiere of Jelly's Last Jam opens at the end of the month, followed in June by the world premiere musical adaptation of Twelve Angry Men (click here for more info on both). And then watch for the announcement of their 25th Season; I would be surprised if it didn't include at least one Sondheim show.
You should also check out the line-up at Crooners, who has been adding more theater cabaret type shows to their schedule. They have a ton of shows on their multiple stages, including their new outdoor stage The Belvedere which is sure to open up again as the weather warms up. And they have a great food and drink menu (if a bit lacking on the vegetarian side) available before and during performances. Here are just a few shows this month that feature #TCTheater artists: 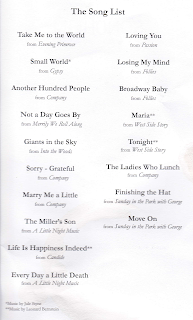