Broadway Tour of "The Prom" at the Orpheum Theatre 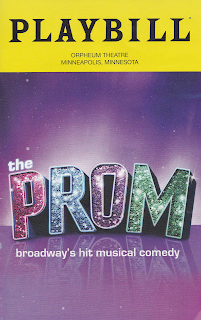 Who goes to the prom for the first time at the age of 48? This theater blogger does! And happy to, when The Prom is not the silly cliquey high school party, but rather a super fun, sweet, sassy, and heart-warming musical. The 2019 Tony nominee is finally on tour across America, and its message of inclusiveness, the freedom to be who you are, and LGBTQ rights couldn't come at a better time, with the recent rise of anti-LGBTQ sentiment and legislation. A great message, and also a really fun show that lovingly spoofs Broadway, actors, celebrity, and show business, all while bringing us tons of great music and dancing. But don't wait around for a prom-posal; consider this your invitation to the glorious Prom being held on Hennepin Avenue in downtown Minneapolis through Sunday only.
Two very different groups of people come together in The Prom - Broadway actors down on their luck who are looking for a cause to improve their image, and residents of the small town of Edgewater, Indiana. The these groups collide when the Broadway stars hear about a teenage girl named Emma who wants to go to the prom with her girlfriend, which terrifies the conservative PTA, who shut the prom down. The actors burst into town, all jazz hands and big belts and dance moves, not really thinking too far beyond their own selfish motives. But they soon connect with Emma and begin to learn about what generosity really means. Despite their good intentions, their plan to help Emma fails, and she comes up with a plan of her own to not only get what she wants and deserves, but create a prom that's a true celebration of individuality, where everyone is welcome. If only it were that easy; if only intolerance and bigotry could be solved with a song and a dance. But maybe it's a place to start.
The touring cast is truly terrific, with not a weak link amongst them, down to the hard-working ensemble. Kaden Kearney is an empathetic Emma, well matched with Kalyn West as her secret girlfriend Alyssa who's afraid to come out. The two share a sweet chemistry. All of the Broadway stars are just fabulous - Courtney Balan with a big voice and attitude to match as the famous Dee Dee Allen, Patrick Wetzel as the over-the-top star who shares a deep connection with Emma, Bud Weber as the pompous Juliard-schooled Trent, and Emily Borromeo as Chicago's longest tenured chorus girl. Also great are Shavey Brown (last seen in Smokey Joe's Cafe at the Ordway) as the manager/booker who comes along with the stars, Ashanti J'Aria as Alyssa's love-to-hate closed minded mother, and Sinclair Mitchell as Mr. Hawkins, Broadway superfan who connects with Dee Dee on a real level.
From the opening set that's like a colorful cartoon version of the iconic NYC restaurant Sardi's, to the open sky backdrops and high school lockers, the set design transports us to the various locations of the story, with set pieces rolled in, turned around, or dropped from the ceiling. The cast is dressed in fun and character-defining costumes, from Dee Dee's fierce and glamorous jumpsuits, to Emma's casual chic pants and jackets, to a wide array of high school dance attire, and everything in between. Plus - sparkly tennies for all! (Scenic design by Scott Pask, costume design by Ann Roth and Matthew Pachtman)
The fun and poppy score (by Matthew Sklar and Chad Beguilin, whose previous credits include Elf) includes some upbeat numbers that you'll walk away singing, spoofy comedy songs (Eleanor: The Musical?!), and some great empowerment anthems. The show contains many nods to other musicals, it the score and also in the dialogue, which are fun for musical theater nerds to try to catch. The choreography (by director Casey Nicholow) is young, modern, fast, and fresh, creating the best group prom numbers ever.
It doesn't matter if you have fond memories of your high school prom, or traumatic ones, or never went at all, The Prom isn't really about the prom. It's about young people standing up for their rights, different groups of people coming together and learning from each other, and being the best and most authentic version of yourself. What's not to love about that?!
Click here for information and to purchase tickets, and to find out more about student and educator rush tickets.