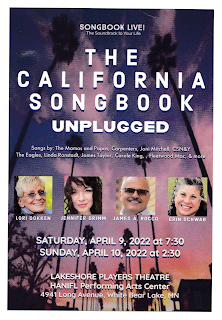 During his 13-year tenure as Artistic Director of the Ordway Center for the Performing Arts, James Rocco created the "Broadway Songbook" series, with over a dozen edutainment cabarets combining fantastic performances by local talent with musical theater history, focused on different composers, eras, or topics. After James left the Ordway in 2017, they started the "Ordway Cabaret" series under Kelli Foster Warder, that was a more personal look at how various facets of Broadway inspired local performers. Now that Kelli has left the Ordway for other roles (see her brilliant Jelly's Last Jam at Theater Latte Da), it remains to be seen what the Ordway will do next. But the good news is that James Rocco's "Broadway Songbook" is back, retitled "The Songbook Experience." After omicron forced the cancellation of a January Songbook focused on the late great Stephen Sondheim (a show which will hopefully return later this year), they're finally on the Lakeshore Players Theatre stage with The California Songbook: Unplugged, not exactly Broadway, but still great music history edutainment. There's one final show this afternoon with a few seats remaining.

I'll let the creators describe the concept for this Songbook: "In the mid '60s, the music business began moving from Tin Pan Alley and the Brill Building in New York City to Los Angeles. A new sound was coming from Laurel Canyon: a cross-pollination of folk, country, pop, mysticism, rock, & even show tunes - all blended together. At that time, The Beatles, the British Invasion performers, and Motown artists dominated the radio airwaves. But in 1965, when The Byrds recorded Bob Dylan's "Mr. Tambourine Man," every record executive was on the look-out for that new folk/rock sound. And that’s just the beginning of the sounds that were born in California."

As in all Songbooks, James Rocco hosts and provides a running commentary with interesting tidbits and facts about the songs and composers, combined with fantastic performances of the songs discussed. This show features that great California sound of the '60s and '70s, including Joni Mitchell, James Taylor, the Mamas and the Papas (Mama Cass's Laurel Canyon home was an incubator for much of the early days of the sound), the Eagles, Linda Ronstadt, the Beach Boys (the epitome of California beachy cool music), the Carpenters (my personal favorites), Carol King, and Fleetwood Mac.

James is joined onstage by two power-house singers and consummate performers, both queens of the cabaret in their own right, Jennifer Grimm and Erin Schwab (see them both perform individually at Crooners and elsewhere around town). Completing this tight quartet is the "Lorchestra," Lori Dokken, pianist extraordinaire who also sings a few songs (including Carole King's "I Feel the Earth Move") and provides vocal backup. The show is just one fantastic and beloved song after another (there were only a couple I didn't recognize, and I wasn't born until 1973). Highlights of the evening are Jennifer's gorgeous renditions of Joni Mitchell's "Both Sides Now" and Fleetwood Mac's "Landslide;" Erin's plaintive "Superstar" (by the Carpenters, part of a wonderful medley that happily turned into a singalong) and wild and trippy "White Rabbit" (Jefferson Airplane); and James' lovely renditions of the Eagles' "Desperado" and James Taylor's "The Secret of Life."

The Songbook is back and I am here for it! James promised a couple more Songbooks this year at Lakeshore Players Theatre's gorgeous Hanifl Performing Arts Center in White Bear Lake, so stay tuned for the next installment of this fantastic and much missed series (check out their YouTube channel here).