"Class of '85" by Collide Theatrical Dance Company at Gremlin Theatre 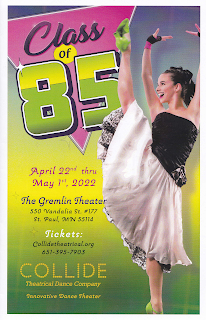 For two weekends only, Collide Theatrical Dance Company is remounting their super fun original jazz dance musical Class of '85, which premiered in 2014 (just their fourth production). They've made some updates to the music, characters, and story, and moved from the spacious Southern to the more intimate Gremlin. As with all of their work, it's creatively choreographed to well-chosen music, impeccably performed by this troupe of dancers. Class of '85 is not only a fun '80s homage with all of the fashion and music we love, but it also has a poignant (but not heavy-handed) message about looking beyond the labels we put on each other to see the human with real feelings and experiences behind it. Only three performances remain this weekend, in addition to a virtual option - click here for more info and tickets.

The show begins with the principal (played by director/choreographer Regina Peluso, who also gets a dance or two, and to show the other side of her character too) calling the assembly (i.e., us) to order. She and "drama king" George (Ben Siglin) are the only ones to speak throughout the show; the dancing does most of the talking. Eight dancers (also including Jarod Boltjes, Megan Carver, Renee Guittar, Patrick Jeffrey, Grace Kidder, Javan Mngrezzo, and Rachel Seeholzer) portray the usual high school stereotypes - the spoiled princess, the cheerleader, the nerd, the jock, the rebel. We follow these familiar characters through a school day, Saturday detention (similarities to The Breakfast Club and other '80s movies are intentional), and the all important Prom night. Company dances alternate with solo dances, in which we get to know each character a little better, and see that they're more than how they're perceived. Their detention assignment is to write an essay on the subject "Who Am I?" (a big topic for even grown adults), and we get to see a dance version of each essay that reveals neglectful or abusive parents, bullying, and other difficulties these kids are hiding behind their high school persona. The choreography and the dancers do a beautiful job of conveying all the angst, pain, confusion, uncertainty, and joy of being a teenager.*

The soundtrack is a selection of recorded music - original artists Queen, Prince, Cher, Bruce Springsteen, and more, plus some more recent covers of '80s songs. It's a great soundtrack, and each of the songs tells a story, but I do miss the live band and vocalists that Collide used to have in their shows pre-pandemic, and I hope they're able to return to that soon.

I don't believe I've ever seen a dance show at Gremlin, and rarely even a musical. It's a much smaller space than the Southern, but somehow, these nine dancers fill every inch of the space without making it feel too crowded. In fact I think it increases the intimacy of the characters in the story, and makes the audience feel more a part of it. They use all areas of the space, including bouncing off of and twirling around the poles in the front corners of the thrust stage. Desks are used as props for dancing on and around, or smoothly pushed out of the way. The dancers sport a couple of different wardrobe changes appropriate to their character, that look like normal street wear but allow for the incredible movement of the dances.
Head to Letsget High (get it?) this weekend to experience the music and fashion of the '80s, looking beyond labels, and most of all - fantastically entertaining dancing.

*Some text borrowed from my review of the 2014 production.