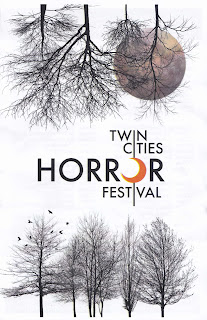 Here's the thing: I don't like horror. I don't watch horror movies. Halloween means nothing to me other than the opportunity for fun-sized candy. But what I do love is the #TCTheater artists who create new and inventive work for the genre-specific mini-fringe fest known as the Twin Cities Horror Festival. Their 11th season includes 11 shows, with performances daily now through October 30. If you love horror, this is definitely going to be your thing. And even if you don't, there's a lot to enjoy. I saw six of the 11 shows; keep reading for brief thoughts on each one, and for more in-depth TCHF coverage, follow my horror-loving friends at Minnesota Theater Love and The Stages of MN.
The entire festival takes place at the Crane Theater in Northeast Minneapolis, with most shows playing on their main stage, and a few in their studio space for a more intimate and close creepy feel. TCHF and other spooky-themed merch is available for purchase in the lobby, along with snacks and drinks. There are also some other fun on-theme activities and displays for your between-show entertainment. Like the MN Fringe, shows are an hour or less, with a half hour between shows. You can purchase tickets for individual shows, or buy a pass for multiple shows. All of the shows I saw yesterday were at or near full capacity, so it's a good idea to make reservations in advance (especially for shows on the weekend or in the smaller studio space). Visit the TCHF website for all the details, and happy horror-ing!

ALL YOUR WHITE DARLINGS by Dangerous Productions
If you're looking for a bloody horror show with a good dollop of social commentary, this is the show for you. Theo begins working for a company called Nile.com, which is located on a private island called Niletown and even has it's own Siri-like AI system, called Vikki (think Amazon). In the vein of the brilliant Apple+ series Severance, it's a seemingly idyllic workplace, but something is just a little off. Things go great for this "diversity hire," (micro aggressions aside) and within the year there are eight Black people working for the company - success! But when news breaks of yet another police killing of a Black man, White people on the island start turning up dead, with bloody messages attached. The "Social Justice Slayer" or "Black Lives Mauler," as the killer is called, is bringing attention to the murder of Black people by killing "all your White darlings." As per usual with this company, and foreshadowed by the blood-stained tarp on stage (under the simple white platform used as a table, bed, or other furniture), things get bloody. Theo is accused of being the killer, and attempts to find their identity himself. Is it one of the few Black people on the island, or a racist trying to stir up trouble, or just a deranged killer using this as an excuse? Written by Duck Washington and directed by Alsa Bruno and Tyler Olsen-Highness, with a cast dressed in business casual khakis and committed to the Stepford-like horror tone, and an eerie soundscape that builds the tension with unexplained unidentified spine-chilling sounds, this is a fun and horrory show that raises some real questions - who will atone for all of the Black bodies? 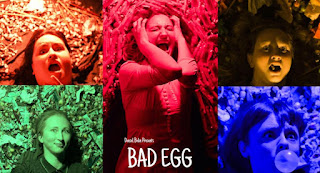 BAD EGG by ​Denzel Belin Presents
Written and directed by Denzel Belin, Bad Egg reinterprets Willie Wonka and the Chocolate Factory as a horror story. Which isn't that much of a stretch - a grown man who invites children into his home, exposes them to danger, and laughs as each one of them meets a gruesome end, pretty creepy when you think about it. Our storyteller is Veruca Salt, the one Willie Wonka calls a "bad egg," showing us a different side of the spoiled little rich girl. A mother who abandoned her, a father who ignores her other than buying her way in the world, and tentative friendships that are betrayed. V is suffering from some serious PTSD when she joins a new school, and is cajoled into telling the infamous story of that day. Bella Maldonado performs the role of V with dead seriousness, grounding the wacky story that flashes back to that weird little trip through the Chocolate Factory. The committed cast plays multiple roles, with Phil Schramm as the diabolical Willie Wonka. A fun and scary twist on a classic. 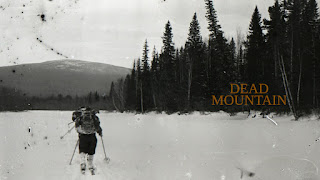 DEAD MOUNTAIN by Third Floor Studio
In this fictional account of modern day scientists researching the real life 1959 Dyatlov Pass incident in which nine Soviet hikers were found dead under suspicious circumstances, things take a supernatural turn. The lead researcher and her team visit the site of the incident to gather data to support her thesis that a sudden avalanche caused the hikers to flee their tent unprepared for the elements, resulting in their death from hypothermia (which is what the 2019 investigation concluded). All she wants to do is find out the truth about what happened to the hikers, particularly a female hiker Luna, whose journal she's reading, but she also has to deal with annoying coworkers, office romances, and people who don't believe her. Scenes flash back and forth from the present day researchers to the past hikers, speaking in Russian or miming the action as the researcher reads the journal aloud. Locals tell stories of the spirit of the mountain who may be angered, but the scientist doesn't pay it any heed, until she becomes so obsessed with Luna that she runs out into the cold and thinks she sees her, and has to save her. Written by Cara White and directed by Jason Kruger, with the believable cast dressed in realistic costumes of past and present cold weather gear, Dead Mountain is a compelling story that starts out as a fascinating fact-finding mission and turns creepy at the end. 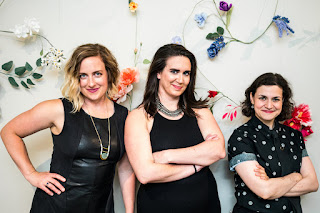 THE SHRIEKING HARPIES by The Shrieking Harpies
The Shrieking Harpies (aka Lizzie Gardner, Taj Ruler, Hannah Wydeven) perform improvised musicals, as you may have seen at the Minnesota Fringe Festival or comedy venues around town. for this festival with a spooky theme. An audience member picks a genre out of a hat (the show I attended - cults) and provides a name (NXIVM, the first cult that pops into everyone's head these days). From there the harpies spun a weird and wacky tale with totally improvised dialogue and songs (accompanied by Justin Nellis on keys). It's so good it's hard to believe it's made up on the spot, particularly the songs. Not just a wild and funny story, but they also have lovely voices and sing gorgeous harmonies. Maybe because they've been doing it for so long that they're able to anticipate what the others are doing, the story and music flow naturally and seemingly effortlessly. The story I saw involved a cult that sells face cream called “cream of god” (ew) and they take in a pregnant woman, planning to kill her and her baby due to an ages old feud. We also saw a few flashback scenes, the three performers taking turns playing the characters, but somehow it all makes sense and hangs together fairly well. It's always great fun to watch The Shrieking Harpies create something live in front of you, especially in a silly spooky way. 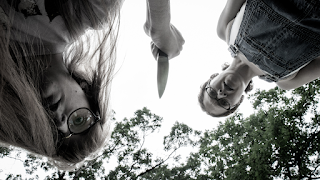 STABBY STAB STAB by Special When Lit & The Winding Sheet Outfit
This first ever co-production between the artists who brought us the wild and wacky Colonel Sanders story Finger Lickin' Good and the beautifully haunting Årsgång: What You Follow Follows You, two of my favorites of this year's MN Fringe, has already sold out it's five-show run. Stabby Stab Stab is based on the true story of two Wisconsin tweens obsessed with the story of Slender Man who stabbed one of their classmates 16 times (she survived). Written by SWL's Nissa Nordland and directed by TWSO's Amber Bjork, it really is the perfect blend of the former company's wild sense of fun and the latter's meticulous and thoughtful attention to detail. Nissa and Kayla Dvorak Feld play the two girls, both so believable and somehow empathetic despite their horrible deeds. Like TWSO always does, Stabby Stab Stab explores the human side of the splashy headline, and posits a theory for how this childhood friendship went so terribly wrong. With a soundscape created by Derek Lee Miller and Sam Landman, beautifully designed (by Amber) projections of text and images, and cute and creepy props that fill a child's bedroom, this show effectively tells this true story with a thorough, thoughtful, and consistent tone of creepiness, tragedy, and humanness. It's performed in the Crane's smaller studio space (hence the early sellout), which only makes it more intense and intimate. 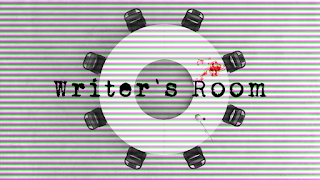 WRITER'S ROOM by The Vincent Hovis Experience
In this trippy meta fourth-wall breaking story, three "influencers" are brought in for what they think is a job interview for an unknown employer, maybe Netflix or a reality star. There's the mom and fashion influencer Jenna (Emily Dussault), the songwriter Mark (Keith Hovis, a super talented composer and songwriter in real life), and the digital investigative journalist Cute (Leslie Vincent). They're given assignments via a cassette tape thrown into the room (how '80s), creepily voiced by Sam Landman (who also provided creepy voices for the above), and it becomes clear it's some sort of PR exercise, cleaning up after a celebrity kicked a puppy or some such nonsense. Soon the characters' own past faux pas are brought up, and then things take an even more dangerous turn (in a way I won't spoil here). Written by the ensemble, it's very clever and twisty, with natural and funny dialogue, and speaks to how in the social media age, our past (mis)deeds are always there to haunt us. What's scarier than that?!
There you have it, the 2022 Twin Cities Horror Festival. As mentioned above, for full coverage visit my fellow bloggers The Stages of MN and Minnesota Theater Love. If I had to choose, I would say Stabby Stab Stab is my favorite this year (not surprising given my love for thoughtful detailed brilliance of TWSO), with honorable mention for the trippy and twisty Writer's Room. But as I've said, the bloody horror stuff isn't really my jam, the psychological thriller stuff appeals to me more. However you like your horror - funny or terrifying, outwardly bloody or bubbling just under the surface - you'll find it at TCHF. Shows begin at 1:30 today and tomorrow - see the website for all the details.