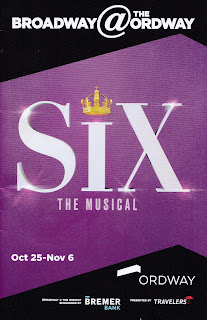 It's only been three years since the six Queens of the smash hit musical SIX have been seen on the Ordway stage, but what a three years it's been! Shortly after the show's month-long run at the Ordway in December of 2019, as part of a US tour, it went to Broadway. Previews began in February of 2020, but before opening night, a global pandemic shuttered Broadway's doors for a very long and unprecedented 18 months. But these Queens are resilient; the show finally opened in October of 2021, just four years after it debuted at the Edinburgh Fringe Festival, an unlikely trajectory for a Broadway musical. Nominated for eight Tony Awards and winning two (score and costume design), SIX is still playing on Broadway (and hopefully will for a long time). This year they launched a new tour, which opened at the Ordway this week and continues through November 6. Structured as a pop concert, SIX allows the six wives of Henry VIII to tell their own stories. This musical couldn't have come at a better time, when we're hungry for women's stories, for women to tell their own stories instead of being defined by men, as history has defined these six women by their marriage to a king.  This is the third time I've seen the show, and I only love it more each time. It's so smart, so clever, so modern, so feminist, and so much fun! If you love new, original, innovative music-theater, do not miss this opportunity to see SIX (visit the Ordway website for info and tickets).

The 75-minute show (or a bit longer depending on length of audience applause) is so jam-packed with clever wordplay that I'm certain I didn't catch all of it, even the third time around. But one word sticks out - historemix. SIX is a remix of history; it takes the facts historians have told us about these women, and mixes them up with modern pop culture to give us this new HERstory. Each of the six women is inspired by a modern woman of pop music (most of which I am too pop illiterate to get) as they sing their story in one song to prove that they've suffered the most hardship at the hands of the king and should be declared the Queen of this group of queens. Conveniently there's a nice bit of symmetry in the fates of Henry's wives; as they sing, they were "divorced, beheaded, died, divorced, beheaded, survived." If this competition among women about the tragedies in their lives seems a little uncool, well, let's just say that this show is too clever to fall into that trap, and turns it on its head. While they act like they're competing, these women are actually celebrating and supporting each other.*

This dynamite touring cast of six divas (plus four very important alternates) completely make these roles their own, bringing their own spirit and spice to each Queen. Individually their voices are all outstanding, and in the contest of the show, my favorite is always whoever is singing. As a group, they're divine, with complementary harmonies, backing vocals, and dancing support. In chronological order, Gerianne Pérez is a strong leader as the first wife Catherine of Aragon; Zan Berube is consistently funny as Anne Boleyn; Amina Faye is sweet and adorably dorky as Jane Seymour, the only one he truly loved (I'm sure); Terica Marie is fun as "the Queen of the castle" Anna of Cleves; Aline Mayagoitia is hilarious in K. Howard's supreme confidence that's covering a lot of trauma (her song "All You Wanna Do" may be the most subversively brilliant of them all); and Sydney Parra (whom I saw play Eurydice in the Hadestown tour earlier this year) is lovely as Catherine Parr, the one that survived.

This production brings back together the artistic team from the UK production, including directors Lucy Moss and Jamie Armitage. Choreographer Carrie-Anne Ingrouille has created some really sharp and fabulous modern choreography that contributes to the feeling that this is the most awesome pop concert you've ever seen (caveat: I've never attended a pop concert). Costume designer Gabriella Slade has dressed the women in outfits any current pop diva would be thrilled to wear, but with hints of the time period (and those amazing glittery studded heels!). The relatively simple multi-level stage set allows these talented women to be the focus, with the assistance of some dynamic and exciting lighting (scenic design by Emma Bailey, lighting design by Tim Deiling). And best of all, the awesome four-piece all female band (dubbed the "ladies in waiting"), led by Katie Coleman on keyboard, is in full view on the stage and even get an introduction or three during the show. This entire production is a showcase of female talent and sisterhood.*

I've seen a lot of comparisons of SIX to Hamilton. I can see the similarity, in the way that Hamilton uses the popular vernacular and music of the day and a diverse cast to tell a historical story. But despite the revolutionary nature of this concept, Hamilton is actually quite a traditional musical in terms of its structure and format. SIX is not. There's no story arc or plot; it's more of a character study as told in concert form, similar to Hedwig and the Angry Inch or Altar Boyz. I love the use of this unconventional format, and I love that the creators use the time they need to tell the story, in this case 75 minutes, and don't try to stretch the concept to a more traditional 2-3 hour length with a 20 minute intermission to sell more concessions, which is what it often feels like intermission is for. They knew what they wanted to say, they knew how they wanted to say it, and they did it in the time and format required, staying true to the concept as the popularity of the show has grown. And they've done it with huge success.*

Don't miss this opportunity to see one of the biggest (and most deserving) smash hit musicals of today! SIX continues at the Ordway Center for the Performing Arts in downtown St. Paul through November 6.

*Some text borrowed from my review of the 2019 production.