Broadway Tour of "Cats" at the Orpheum Theatre 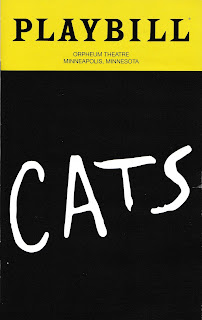 People dressed in cat suits dancing and singing songs based on some poems about cats. How on earth did this bizarro idea win seven Tonys include Best Musical, become the longest running show on Broadway at the time it closed in 2000 (now 4th longest, soon to be passed by Wicked), and become a worldwide phenomenon?! I first saw it on tour 25 years ago, and at the Chanhassen a few years later. Since then I've become a bit more discerning in my music-theater tastes, preferring the smart and clever scores of Sondheim, or edgier musicals like Next to Normal, to commercial blockbusters like Cats. You know, musicals that are about something, and have something to say. But I also know that I wore out my OBC recording of Cats back in the day, and I do believe cats to be the superior animal, so I decided to revisit the musical. At opening night last night it was obvious that the crowd loved it, and I can see why. It's completely ridiculous, but in a kinda wonderful way. This production features some amazing and unique artistry, honors the divine felinity, and is a whole lot of fun. And sometimes that's enough. Experience the phenomenon yourself at the Orpheum Theatre through Sunday only (visit the official HTT site for info and tickets).

Does Cats have a plot? I don't know, not really. A bunch of cats gather in an junkyard one night, where one of them will be chosen to ascend to the "heavyside layer" (like cat heaven?). Basically it's a series of scenes about different cat characters, and anyone who's lived with cats (I've lived with seven in my lifetime, three currently, one who as I write this is trying to opened a beveled closet door) will recognize the characteristics of these very different cats. T.S. Eliot's poems, which Andrew Lloyd Webber set to music, are very clever and playful in a nonsensical kind of way. And ALW's score is a bunch of delightful earworms, and includes one of his most well-known and beautiful songs, "Memory."

The thing to love about Cats is the performances of the two dozen actor/singer/dancer/cat impersonators on stage. They're all so completely committed to being cats for a few hours, and are so much fun to watch. Even when not at center stage, sitting on the sidelines watching, they're in full cat mode. And they perform the choreography (by Andy Blankenbuehler based on the original Tony-nominated choreography by Gillian Lynne) with such precision. There's a lot of dancing in this show, a lot of it ballet-like, but with some modern dance elements, and even a tap-dancing section (cats who tap? why not?!). It's quite captivating to watch the athletic, acrobatic, and oddly graceful movements of these cat-humans, tails whipping around as they pirouette. The cat choreography is truly unlike anything else, creating some gorgeous tableaus and thrilling moments.

Cats is a true ensemble piece, with nearly every cat getting a moment or two to shine. Highlights in this talented cast include Hank Santos, magnetic as the Elvis-like Rum Tum Tugger, maintaining his jerky, almost robotic, hypnotizing movements throughout the show, not just in his solo number; Michelle E. Carter as a fun and fiercely tapping Jennyanydots; Brian Craig Nelson and Taryn Smithson as the mischievous pair Mungojerrie and Rumpleteazer, with an amazing partner dance; Cameron Schutza with a deep and resonate opera-trained voice as Old Deuteronomy; the gorgeous ballet dancing of Ibn Snell as Mr. Mistoffelees; and last but not least, Tayler Harris as Grizabella, singing "Memory" first with beautiful restraint, then unleashing her full power on the final verse "Touch me, it's so easy to leave me" in a way that gave me chills.

Trevor Nunn won a Tony for directing the 1982 original production, and returned for the 2016 revival upon which this tour is based (I get the feeling it's more remount than revival). Also returning is John Napier's iconic Tony-winning costume design; the beautiful thing being how each cat is different. The basic costume is a skin-tight bodysuit with furry leg warmers, a rope around the waist from which hangs a tail, and maybe some more fur on shoulders or wrists. Each cat has different markings and coloring that gives them personality (and sometimes a human article of clothing or two). Cat ears are nestled in a bed of messy hair (a few pairs of ears seen in the audience as well, including on yours truly), and the make-up matches the costume and completes the transformation. Napier also designed the set which is a junkyard with oversized items piled up in the shadows. A large moon hangs over the show, and there are some weird effects like this UFO thing that raises from floor to ceiling before the show, and of course the ascension to the aforementioned heavyside layer. Again, ridiculous, but effective.

This year's Broadway touring season reflects the missed season on Broadway two years ago due to the pandemic, with a lot of shows we've seen before. Cats is one of those. It's nothing new or innovative, doesn't provide any social commentary or thought-provoking ideas (see SIX), but like it or not, it's a classic of the American (and British) musical theater canon. Cats is beloved by many, and I found it very entertaining and was reminded why I loved it 20+ years ago - the singable and silly score; the over the top costumes, dancing, and performances; and honoring the ineffable, effable, effanineffable cat.