"The Thin Place" at DalekoArts 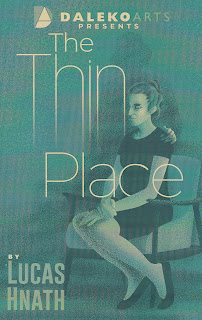 It's October, and #TCTheater is starting to get spooky. There's something about a chilling story that's so satisfying when the leaves start to turn and the weather gets cooler. A few days after I saw Theatre Elision's hauntingly beautiful Ghost Quartet, I made the gorgeous drive out to New Prague to see DalekoArts' regional premiere production of Lucas Hnath's new play The Thin Place. My drive was rewarded with a thoroughly chilling and captivating story, told by a great cast and sparse but effective design. See this deliciously spooky story at the Prague Theatre in charming downtown New Prague weekends through October 9 only!
The play begins with a young woman, whom we will soon learned is named Hilda, speaking directly to the audience, with the lights up. She tells us the story of her grandmother, with whom she used to play mind games as a child, in preparation for being able to communicate after death. Hilda's mom did not like this, and threw Hilda's grandma out of the house, shortly after which she died. Hilda's been searching for her since, and combined with the recent mysterious disappearance of her mom, with whom she had a strained relationship, she's very curious about the other place, the "thin place." She meets Linda, who works as a medium, and as they become friends Linda readily admits that she's just sort of making it up as she goes along, using intuition and observation to tell people what they need to hear. But is that so bad, if they get closure? Hilda's not sure, and after a party with some of Linda's friends, she decides to confront the spirit of her mother, even if she never gets the answers she's looking for.
The play could almost be a solo storytelling piece, and with Kayla Dvorak Feld as Hilda, it would be a great one. She's a very natural and compelling actor; she just is this troubled and grieving young woman, humbly telling us her story. But as she speaks, some of the characters come to life in the form of additional actors, including Lolly Foy as the affable Linda with a fun British accent, and Siri Hellerman and Edwin Strout as Linda's friends in one party scene that gets a little heated. Hilda is silent for most of that scene, and watching Kayla's facial expressions tell us so much about Hilda. Under director Ben Thietje, the dialogue and interactions feel natural, and the tension continually builds through the 90-minute play; it starts off with sort of fun and entertaining stories, but ends with a truly creepy moment and some theater magic that totally got me.
I've never seen Daleko's stage look so blank, or so spacious. It's completely black and featureless, with just two stately chairs and an end table between them. Characters sip tea or coffee out of cozy mugs, and drink wine out of fancy glasses. The subtle sound design adds some ominous sounds that almost aren't sounds, but are enough to give the audience the feeling that something is wrong. Lighting transitions from all of the lights on, to just the stage lighted, to pitch blackness illuminated by a single red bulb. It's all very effective in a less is more kind of way, with a lot of thought and work going in to making it look so simple (scenic design by Robin McIntyre, lighting design by Ellie Simonett, sound design by Kevin Springer).
Lucas Hnath's plays have been seen on #TCTheater stages quite a bit in recent years (The Christians and The Doll's House, Part 2 to name a few), and they're always smart and interesting and thought-provoking. The Thin Place is no exception. Not only does it deal with the very big themes of grief, loss, and what may or may not exist after death, but it also explores how some people manipulate and exploit others' emotions and vulnerabilities to get what they want, whether that's a paycheck or an election win. It's a great choice for DalekoArts, well executed as always, to begin their 11th season that includes the classic White Christmas (plus a twist), the neighborhood comedy Native Gardens, and the sweet and folky Steve Martin / Edie Brickell musical Bright Star. It's a good time to visit New Prague, starting with this spooky and compelling story, and continuing through winter and into next spring.