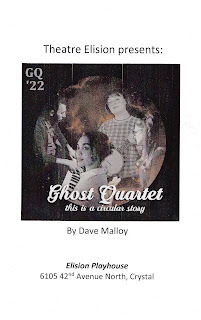 Theatre Elision is back with their first full production since the lovely Islander in July of 2021 (my first post-pandemic-hiatus show). They're bringing back their annual spooky fall hit Ghost Quartet, with a few updates to the production. I've seen it a couple times before, and it’s definitely the type of show that gets better with repeat viewings. The song cycle by Dave Malloy (Tony nominated for Natasha, Pierre, & The Great Comet of 1812) weaves related tales in and out through the 90-minute show, in a way that doesn't quite make sense, but somehow fits together to form a cohesive and compelling story. In a little over five years, Theatre Elision has created and filled a niche with excellent productions of small-cast, one-act, original or rarely done musicals. Ghost Quartet is one of their most successful productions, and one that has only gotten better over time. It's musically gorgeous and truly haunting, a perfect choice to kick off the #TCTheater October scary season (continuing through October 8).
There are a couple of recurring characters that we follow through time, space, and stories. Mainly Rose and her sister/daughter/lover Pearl. They appear in various forms, along with teenager Roxy and her baby, who may also be these characters. We also see Roxy’s brother and parents, in the Usher household. And then there's someone who gets pushed in front of a subway. It defies description, but the stories truly are woven together cleverly and beautifully. Or maybe that's just the whiskey talking; during one song, an ode to whiskey, shots are passed out to lucky audience members. There's also some audience participation in the form of the passing out of percussive instruments, which provides a community feel, even though we're sitting in a traditional theater space, rather than gathered around an in-the-round space like previous productions. The performance space at Elision Playhouse is intimate enough that not much is lost in the transfer to a more traditional theater configuration.
Walking into the Playhouse theater space, the stage is populated with piles of things under white sheets, with the outline of an A-frame roof, like Grandma's attic that's referenced in the score. As the show goes on, the sheets are removed, revealing various flotsam and jetsam - crates, furniture, lamps, frames, and more musical instruments than you can count. The cast has been expanded from the usual four to six (which only makes the sound richer, fuller, and more layered), and all of them play multiple stringed and percussive instruments, along with Music Director Harrison Wade on keyboard (who gets a shout-out or two). Just the choreography of who's playing what, where, and when is incredibly intricate, and accomplished flawlessly.
Director Lindsay Fitzgerald keeps the story flowing smoothly from one scene to the next, nicely balancing the humor and fun of the piece with the darker themes (and she also designed the detailed set). As our four main characters, Kellen McMillen, Abilene Olson, Christine Wade, and Abigail Walker portray multiple people, stories, relationships, and tones, and sing gorgeously, along with added ensemble members (and understudies) Anna Beth Baker and Kay Jay Olson. The score is varied in tone and style, from Americana to jazz, from fun singalongs to plaintive ballads. The sound balance between the miked singers and the multitude of instruments is perfect, creating a beautiful sound in the intimate space, with some cool lighting effects to heighten the mood (sound design by Uriyah Dalman, lighting design by Laina Grendle).
It's been three long years since this previously annual event was last presented, and each year it gets even better. Whether you've never seen it before, or have seen it every year, it's a good time to experience the hauntingly beautiful, participatory (but not in a scary way), fully engrossing Ghost Quartet. Click here for info and tickets, including a pay-what-you-wish performance on Monday.