"The Humans" at Park Square Theatre 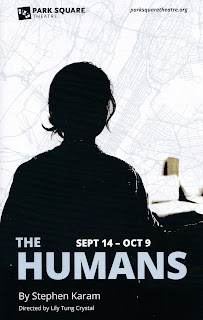 To open their exciting new season, Park Square Theatre is presenting the regional premiere of the 2016 Tony-winning best play The Humans by Stephen Karem (whose Sons of the Prophet they produced a few years ago). This play about a typical family Thanksgiving dinner is devastating in its specificity, in its relatability, in its raw truth, and in the way it lays bare what it is to be human and part of a family. And therein lies its beauty. I saw the Broadway tour, as well as the recent movie adaptation, so I knew we were in for a treat. The stunning design and excellent cast lived up to my expectations; the show cuts deep and is hard to shake upon leaving the theater. If you're a human, you will be able to relate to The Humans - the good, the bad, and the ugly of it. See it in the historic Hamm building in downtown St. Paul through October 9 (#bringtissues).

The Humans takes place at Thanksgiving dinner, with the Irish Catholic Blake family gathering at daughter Brigid and her boyfriend Rich's new place in Chinatown. Mom Deirdre and Dad Erik have driven in from Scranton in a snowstorm, with elderly grandma Momo, suffering from severe dementia, in tow. Other daughter Aimee, dealing with career, health, and relationship crises, rounds out this little family of six. The play is filled with the typical family jokes, reminiscing, and spilling of secrets. The big spill comes near the end of the play, when Erik finally tells his daughters the bad news that's been hinted at (which is bad, but not as bad as I feared). There's no resolution after that, the dinner ends, and everyone goes home. This is a slice of life in the long story of the Blake family, a life that has existed before and will continue to go on. But one gets the sense that this will be a Thanksgiving they'll never forget.*

Lily Tung Crystal, Artistic Director of Theater Mu, directs the play and brings out all of the emotions, humor, and awkwardness of the script; characters at times talk over each other (like people do), and at other times there's a prolonged tension-filled silence. The incredible two-story set allows for multiple scenes to be happening at once, sometimes with characters overhearing what they shouldn't be. Everyone is always on, even if not in the scene, with reactions or quiet moments informing their characters and the story. Lily has added an extra layer to the story for Minnesota audiences by casting the two daughters of this Irish Catholic family as Korean adoptees; as noted by dramaturg Katie Bradley, herself a Korean adoptee, "Minnesota has the highest concentration of Korean adoptees of any state." It's never referred to in the script, but it's nice to see a different representation of a family in this classic family story, especially one that's a common part of our community.Everyone in this cast is so wonderful and so specific in their characterizations. #TCTheater veterans Charity Jones and John Middleton fully embody this weary middle-aged married couple, with so much unspoken but felt between them. Charity is heart-breaking in solo moments of crying when nobody's looking, and John's portrayal of the beloved dad, whom everyone affectionately calls "big guy," as he disappoints his family and fears losing them (with some 9/11 PTSD thrown in) is just devastating, culminating in the powerful ending. Despite being too young for the role, Angela Timberman is a great choice for grandma Momo, with a beautiful, sad, at times funny, and mostly silent portrayal of a woman with dementia. Laura Anderson and Dexieng "Dae" Yang are also wonderful as daughters Aimee and Brigid, the former stoically trying to face her problems, the latter trying to be the chipper host, both allowing the cracks to show through the facade with startling moments of vulnerability. Rounding out the six-person cast is Darrick Mosley as charming boyfriend Rich, trying to impress the parents and support his girlfriend as he navigates these new family dynamics. This group feels like a family, and one of the things that makes this play work is that you can truly feel and see the love amongst them.

The set is almost a seventh character in the play; much is said about Brigid and Rich's basement apartment, with it's lack of light, noisy neighbors, spiral staircase, and multiple entrances. Erik Paulson's set fits the bill and then some, with a large barred window upstairs, a basement that looks like a basement, several different sitting areas, with everything visible at all times, even what's inside the floor between stories (tip: don't sit in the first couple rows). Lights go on and off, strange noises interrupt the scenes, all placing us right there in that apartment (sound design by Katharine Horowitz, lighting design by Karin Olson). Matthew LeFebvre's costumes are very specific to each character, from Mom's suburban cardigan, to Aimee's slick leather jacket, to Brigid's hip dress, to Rich's neat vest.

The aptly titled The Humans shows us the humanity in one specific family during one ordinary and extraordinary Thanksgiving dinner, in a way that cuts to the very soul of the audience and shows us our own humanity. The painfully real portrayal of a loving but complicated family, comprised of loving but flawed humans, is beautifully realized by this local cast and creative team. Continuing Thursdays through Sundays through October 9 at Park Square Theatre.

*Plot summary borrowed from what I wrote about the 2018 Broadway tour.