E/D Presents "The Show" at the Crane Theater 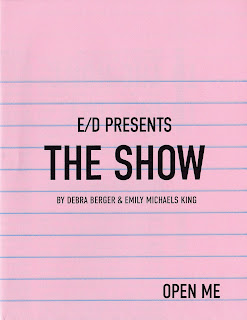 #TCTheater artists Emily Michaels King and Debra Berger officially joined forces in 2018 under the company name E/D, debuting with the "uniquely beautiful and chillingly disturbing" mixed media piece Animus. They were scheduled to open their second original piece, entitled simply The Show, on the unlucky date of March 13, 2020. We know how that story goes; it was cancelled due to a global pandemic. They rescheduled it for sometime during the 2021-2022 season, again cancelling due to delta or omicron or whatever variant was raging at the time. But now, finally, this glorious pink explosion of a show is fully alive and running, but only for two more nights! The short two-week run closes on Saturday, so get yourself to the Crane Theater quickly to see this emotionally raw, thoughtfully executed, and completely engrossing show by two uniquely talented artists, who combine to form a whole greater than the sum of its parts. Click here for all of the details and to purchase pay-what-you-can tickets.The Show defies description. It's a rumination and exploration of what it is to be human, to be a woman, to be a young teenager growing up in the '90s. Debra and Emily share the most vulnerable parts of themselves, from their childhood traumas to their grown-up fears. They use recorded music of the era (plus some live singing from Debra), movement and dance, recorded dialogue, live dialogue, and lots of pink clothing, accessories, and props to tell their stories in a non-linear, almost stream-of-consciousness manner. The Show evokes palpable feelings of one's past, from the awkwardness of a middle school dance, to the inexplicable rage of teenagers, to the pure joy of rocking out to your favorite song. It sometimes feels random as they jump from scene to scene, but the individual pieces are thoughtfully arranged so that by the end, we feel like we've been on an epic journey with these two and arrived at a full circle moment.

The audience is let into the theater just before showtime, where Emily and Debra are lying on the floor of the Crane Theater stage space, and we begin with a mediation (which I kind of think every show should). A few outfits are carefully arranged on the floor around them, and a long clothes rack at the back of the stage holds neatly hung clothing in every possible shade of pink, like a life-sized Barbie doll dream closet. Some items are eventually worn, some are just for display, and most end up on the floor (along with everything else) by the end of the show. Debra's alter ego is the "Country Star," and Emily's is the "Superhero," which they at times transform into in their middle school fantasies, meeting in this imaginary world. This is also a story of friendship; you can feel the love and support between these two artists as they perform at times together, at times stepping aside to hold space for the other. I love how they each tape off a square for themselves, overlapping in one corner like a Venn diagram, because this show is like the best Venn diagram of Emily and Debra's overlapping and complementary talents as artists.

The Show is a well curated selection of scenes, stories, dances, moments that bring the audience on an emotional journey through the past and back into the present. It's easy to connect to their stories, with many relatable moments whether or not you were a teenage girl in the '90s. It touches on those raw places of emotion, insecurities, fears, and the endless journey of trying to figure out who you are and where you belong. It feels like a cathartic experience, for the artists as well as the audience.

Go see The Show, many years (even decades) in the making, at the Crane Theater through September 17 only!