"Singin' in the Rain" at Lakeshore Players Theatre 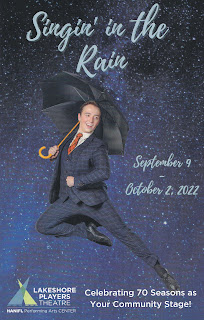 To open their impressive 70th season in White Bear Lake, Lakeshore Players Theatre is presenting Singin' in the Rain. The classic 1952 movie musical was written by legendary musical theater team Comden and Green, and adapted into a stage musical in 1983. It's a big old-fashioned musical with comedy, romance, dancing, and tons of familiar songs, and the team at Lakeshore does a great job in this fun, feel-good musical. See it in the beautiful Hanifl Performing Arts Center weekends through October 6.
The story takes place in the late '20s and centers on the transition from silent films to "talkies." Everyone's favorite Hollywood pair (on screen but not off) Lockwood and Lamont are poised to make it big, except that Lina Lamont has a less than pleasant voice. Don Lockwood and his friend / comic sidekick Cosmo conspire to have rising star Kathy Selden, with whom Don is falling in love, do the singing and talking for Lina. But when she finds out about the dubbing, and the relationship, Lina is not happy, and tries to derail both.
Highlights include:
If you live in the Northeast Metro and are looking for a fun and feel-good old-fashioned musical comedy, well executed by a talented local cast and creative team, look no further than Lakeshore Players Theatre's Singin' in the Rain. It's really like the beloved movie come to life on stage. And check out the rest of LPT's 70th season, which includes some great and ambitious selections like Noises Off, Calendar Girls, and La Cage aux Folles.