"Once" at the Duluth Playhouse 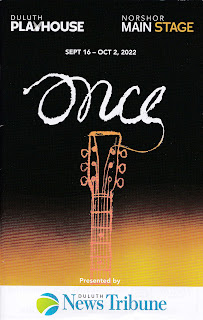 Walking along the greatest of lakes yesterday morning, watching the rising sun turn the clouds shades of pink and orange, while the waves lapped at my feet at the seagulls played in the water, I knew it was absolutely worth driving 300 miles roundtrip in 24 hours to see one of my favorite musicals in my favorite Minnesota city. I'm not saying you should also make the long drive to see Duluth Playhouse's production of the lovely eight-time Tony winning musical Once, based on the 2007 Irish movie and featuring music by stars of the film Glen Hansard and Marketa Irglova, but if you're itching for a Minnecation, or happen to be in Minnesota's favorite vacation spot along the North Shore of Lake Superior, you should definitely check it out, or maybe catch something else in the Playhouse's busy and ambitious 2022-2023 season on multiple stages, which culminates in the Minnesota premiere of Kinky Boots next summer. Not just for nature, adventure, shopping, and eating, Duluth is also a destination because of its incredible arts and culture scene.
What makes Once so special is that it's an atypical love story, about an Irish "guy" and a Czech "girl" who meet in Dublin when both are a bit "stopped" in life. He's a musician who's heart-broken over his ex and thinking about giving up music, she's a young mother and immigrant whose husband is back home, leaving her in limbo. They form a close and intimate (although platonic) connection that changes both of their lives, as they play and record music together with a community of musicians. Through this process they both become unstopped, and are able to move forward on their separate paths through life. It's also a love story about Ireland, and music (as if those were two separate things). Playwright Enda Walsh adapted the movie in a way that maintains that authentically Irish feeling, that bittersweet mixture of joy, pain, and music that is the hallmark of that "little rock in the ocean." Once celebrates the power of music to bring people together, to inspire, to heal.
University of Minnesota Duluth's Ann Aiko Bergeron makes her directing debut at the Playhouse and keeps that intimate feeling on the big stage at the NorShor Theatre, maintaining the delicate balance between humor, heartbreak, and new love. She also choreographed the piece, with some lovely organic movement and dance scenes that capture the emotions of the moment. Most of the action takes place on a stage on the stage, bringing everything in to the center. When not in a scene, cast members hang out on either side of the stage, watching or joining in on the music, creating a sense of community.
A couple of familiar faces from #TCTheater lead the excellent 12-person cast. Alyson Enderle has appeared on several stages around town, and is absolutely charming as the unnamed girl, strong and funny yet vulnerable. As our guy, Minnesota native and UMD alum Steven Grant Douglas returns to Minnesota stages after moving to NYC several years ago and being cast as the lead in the National tour of Ghost, among others. He's got the guitar chops (even when the strap breaks) and the raw emotion hidden under stoic angst needed for the role. And both of them sing just gorgeously, individually and in harmony. They're supported by a talented ensemble that doubles as the band, playing multiple instruments and characters in this quirky little community. Highlights among the 10-person ensemble (plus one adorable little girl, Sage Sorenson, playing the girl's daughter) include Ole Dack as the amiable music store owner, who strikes up an unexpected friendship with Eric Elefson's bank manager (hilariously singing badly); Ava Jo Molzen as the girl's flirty friend, with a featured dance; and multi-instrumentalist Jeff A. Miller, reprising his role as drummer Svec from Daleko Arts' production this spring, about 200 miles away in New Prague. The musician-cast sings and plays this folky Irish score, so resonant and emotional, well under resident Music Director Kyle Picha.
In the beautifully renovated NorShor Theatre, a smaller wooden stage is built on the theater stage of the 600-seat theater, with a backdrop of metal plates adorned with instruments of all sorts. But these are just for show, the working instruments fill the spaces on either side of the stage, along with a few stools and crates, which are brought onto the stage as needed for set pieces. The cast is dressed authentically and specifically, including the girl's dress with boots and jacket, and the guys vest, jeans, and newsboy hat (scenic design by Curtis Phillips, costume design by Peg Ferguson).
Click here for more information on Duluth Playhouse's 2022-2023 season, which includes Main Stage and Youth Theatre productions at the NorShor, along with some edgier Underground shows across the street at Zeitgeist. It's a pretty great way to end a day of exploring Lake Superior's gorgeous and endlessly fascinating North Shore.