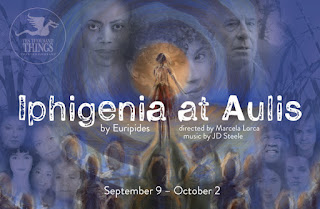 This fall, Ten Thousand Things, my favorite interpreter of Shakespeare and other classic works, brings us the Greek tragedy Iphigenia at Aulis. Because they are not yet able to tour the show to their usual locations of community centers, homeless shelters, and prisons, they are presenting this show in a sort of hybrid style between the usual stripped-down bare-bones production in a small space surrounded by a few rows of chairs, and a more traditional proscenium style production. They also performed the show outdoors, which may have had a more TTT feel, but in the former Lab Theater, now known as Luminary Arts Center*, it still maintains the TTT hallmark of making classics feel fresh, relatable, and relevant, if in a more formal theater style (but still with "all the lights on"). They're set to return to touring this winter, which will likely bring back their usual style, but in the meantime, Iphigenia at Aulis is a gorgeous production with a large and hugely talented cast, that uses an original score to tell this ancient story.
In case you're a little hazy on your Greek mythology (as I was), Iphigenia is the daughter of Agamemnon, who is about to sail to Troy to fight a war that began when his brother Menelaus's wife Helen ran off with (or was kidnapped by) Paris. But that's beside the point. Our story here focuses on Agamemnon, who is called upon to sacrifice his daughter Iphigenia to the goddess Artemis, in order for the winds to turn so that the fleet can sail to Troy. He is devastated, but feels he must do it to appease the gods and save Greece. He calls for his wife Clytemnestra and his daughter to come to Aulis under the pretense of marrying Achilles, who, when he finds out about the plan, tries to save Iphigenia. Needless to say, mother and daughter are upset when they hear the truth of this plan, but Iphigenia bravely decides to willingly sacrifice herself for her country.
The excellent 12-person ensemble functions a chorus, with one or two of them stepping out to play a character in the story, then stepping back into the chorus. Steven Epp is powerful and moving as Agamemnon, who clearly loves his daughter despite doing the unthinkable. Regina Marie Williams is strong and regal as Clytemnestra, fighting and pleading with anyone who will listen to save her daughter. Other featured roles include Isa Condo-Olvera as Iphigenia, youthful and brave; Christopher Jenkins as the heroic Achilles, William Sturdivant as Menelaus, and Sally Wingert as Agamemnon's loyal friend. The chorus is also comprised of Stephanie Anne Bertumen, Katherine Fried, Elizabeth Reese, Janely Rodriguez, Hailey "Sky", and JoeNathan Thomas, and it's really beautiful how they move, sing, and speak almost as one. When not participating in the scene they're watching, listening, and reacting. Director/choreographer Marcela Lorca has created some really beautiful movement, and a graceful flow from scene to scene.
Costume designer Sarah Bahr has dressed the ensemble in similar but unique white shirts and gray or denim pants. They don a vest, sash, hat, or skirt, in shades of blue or purple, as they take on a character, removing the piece as they fall back in with the chorus. The large open performance space of the Luminary Arts Center is framed by a half circle of denim pillows upon which the chorus occasionally lounges, with banners on poles at the back of the space, and patchwork arches on either side for entrances and exits. The combined effect of the design has a breezy seaside feel (set design by Rachel Breen).
Local music legend JD Steele has composed original music for the piece, with a gospel feel, and his brother Billy Steele accompanies the cast on keyboard. The cast occasionally sings solos (including Iphigenia's powerful song), but mostly in beautiful choral harmony. They're joined at times by a local choir (directed by the composer himself), literally shaking the bleachers with their full rich sound. I walked away singing some of the songs, and would love it if they made a recording of this piece, like they did for Thunder Knocking on the Door.
In 2017 TTT performed Electra, about Iphigenia's siblings who kill their mother for killing their father for killing their daughter (and you thought your family dynamics were complicated). Iphigenia at Aulis fills in some of the history of that story, with classic themes of family love, sacrifice, and the horror of war. Even though I missed sitting a few feet away from the actors as they fully embody these stories, this production shows that even in a huge space, Ten Thousand Things is still able to create intimate and emotionally resonate work. You can see it at the Luminary Arts Center through October 2, but get your tickets soon because even in the large stadium style seating, it is selling out.
*I've missed seeing shows at the gorgeous Lab-turned-Luminary theater, but I forgot how troublesome parking can be in the North Loop neighborhood. I recommend getting there at least 30-40 minutes early to park in the paid lot across the street, which will fill up, and has a long line at the pay machine. If that fills up you're pretty much out of luck; you could try to find (free) street parking but that's a rarity on a weekend evening. I ended up parking temporarily in the small "contract only" lot more directly across from the theater (which in pre-covid days was controlled by the Lab, and you would pay in their lobby) and when I ran in to ask about parking, I was told that I was "probably OK" parking there. I was, and I'm not telling you that you should or can park there, but that was my experience (don't hold me responsible for any towing fees). If whoever owns that lot (which was mostly empty, with 40-60 spots) were smart, they would make an arrangement with the theater to allow patrons to park there.