"Vietgone" at the Guthrie Theater 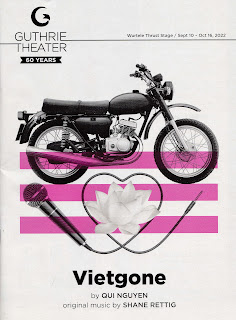 Next spring, the Guthrie Theater will celebrate its 60th anniversary; I've been a season subscriber for about a third of that time. Their new season (the first full-length season since the pandemic) begins with a play that may challenge some of its traditional audience, but that's not a bad thing. In fact, in the case of Qui Nguyen's ambitious and genre-blending play Vietgone, first seen in #TCTheater about five years ago at Mixed Blood Theatre, it's a very good thing. Rather than yet another story about the Vietnam War told from the point of view of Americans, it's a love story set against the backdrop of the Vietnam War, as told by the son of Vietnamese refugees. Vietgone is part rap musical, part romantic comedy, part bawdy sex comedy, part war story, and all engrossing. It's in-your-face and squirm-inducing, but is utterly effective in communicating the refugee experience and making at least this audience member rethink their views on the Vietnam War and American involvement.*

The play begins with the playwright (played by Viet Vo) introducing the play and assuring the audience that the play is most definitely not about him or his parents, wink wink. He explains the language used in the play, namely that the Vietnamese characters will speak in modern American English, while the American characters will speak in broken English and use a lot of phrases like "french fries, cheeseburger, yeehaw." This brilliant choice normalizes the refugees while really allowing us to see the experience from their perspective. And it's also really funny.*

The main action of the play takes place in a refugee camp in Arkansas in 1975, where the playwrights' parents met, along with a few explanatory scenes of the characters in Vietnam before they fled when Saigon fell and the American troops pulled out. Quang is a pilot in the South Vietnamese armed forces and is forced to flee, leaving his wife and two children behind. Tong is an independent young woman who is offered passage to America and sees it as an opportunity for a new life. The two find each other, and find something they need in each other, despite their differences and the obstacles they face. The often zany comedy is interrupted by rap monologues by Quang and Tong, which is really the only time we get to hear their real thoughts, fears, hopes, pain. It's incredibly effective and sort of stops you short to see the serious situation behind all the jokes.*Directed by Mina Morita, the story told by a small five-person cast fills up the Guthrie's large thrust stage, with the right mix of comedy and drama, dialogue and music. The opening and closing scenes are particularly clever, as we see behind the proverbial curtain to the workings of the play, with the hard-working stagehands visable throughout the show helping with transitions and keeping the action flowing. In additional to the spoken dialogue scenes and the rap songs, the play includes a pretty adorable rom-com montage, some fun dance sequences (by movement director Darrius Strong), and a fantastic slow-mo fight scene (by fight director Aaron Preusse).

The mostly non-local cast personifies these characters and this story well. Emjoy Gavino gives a gutsy performance as Tong, a character who unapologetically knows who she is and what she wants. Hyunmin Rhee is also great as the conflicted Quang, torn behind the family he left behind and the life ahead of him. Ensemble members Rebecca Hirota, Viet Vo, and #TCTheater's own Eric Sharp play multiple roles, making each one distinct, whether funny or heart-breaking. And they're all dressed in some fab '70s wear (designed by Enver Chakartash).

The spectacular set features a mostly bare stage with raised levels on either side, a moveable screen revealing a collection of Americana along the back wall, several whole or part motorcycles, and bunk beds and a picnic table for the refugee camp set. Beautiful projections on the screen and/or back wall help set the tone and scene. (Scenic design Lex Liang, projection design by Nicholas Hussong.)

Vietnam is a complicated war for many reasons. When Americans think or talk about it, it's usually in the context of what a mistake it was, or the protests against it, or the horrible way our vets were treated when they returned. But, as this play so elegantly says, for the people of South Vietnam, war wasn't a choice. American involvement was not a mistake, it was a ray of hope. There are wars going on around the world today, wars that America may or may not get involved in, and should or should not get involved in, depending on who you ask. But what's certain is that the people in the path of war don't have a choice and don't want it, and American is supposed to be the safe place to which they can come to make a better life for themselves and their families, like Tong and Quang did.*

See the beautifully written and perfectly executed Vietgone at the Guthrie through October 16.

*Some text borrowed from what I wrote about Mixed Blood Theatre's 2017 production.