"Lumberjacks in Love" at Lyric Arts 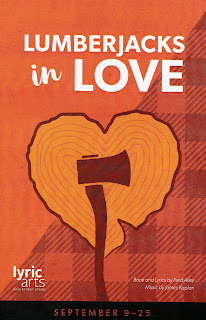 Lyric Arts is easing into their ambitious season with the charmingly corny musical comedy Lumberjacks in Love. In the vein of Deer Camp the Musical or the Don't Hug Me series, Lumberjacks is full of local humor (northern Wisconsin, but that's pretty close to Minnesota*), dumb but amusing humor, and goofy songs. But thanks to the amiable cast you can't help but fall a little in love with these oddball characters in their search for (or running scared from) love.
Our four happy lumberjacks (played by Mark Deel, Ryan Lee, Mark Palmer, and Steven Ramirez) are living the life in a logging camp in Northern Wisconsin, when their equilibrium is disturbed by a couple of unexpected visitors of the female persuasion. As a joke, one of the men ordered a mail order bride (ugh) for another, and they all run scared at the thought of a woman among them. But it turns out there already is. A young woman who grew up in camp with her father is disguising herself as a man called "The Kid," and has fallen in love with one (or two) of the men. She decides to pretend to be the mail order bride, while the actual mail order bride isn't who she claims to be either. After some shenanigans, we arrive at a happily ever after for our wacky lumberjacks.
Director Scott Ford sets a campy tone, which the cast fully embraces. Although "lumberjacks" are in the title, it's the "lumberjills" (see the note in the program about historical women in logging camps) who steal the show, both Siri Hammond's sweet and cute Kid who's one of the guys but longs to be a woman, and Caitlin Burns' smart and tough not-really-a-mail-order-bride who sings a song about "stupid love." The cast is dressed in lumberchic (I particularly loved the Kid's makeshift dress constructed from burlap bags, plaid shirts, and red long underwear, like a Project Runway unconventional materials challenge) and cavorts around a set that looks every bit the logging camp cabin, complete with dingy blankets on the bunks and logs everywhere (costume design by Bronson Talcott, scenic design by Todd Edwards).
Onstage musicians (Music Director Michelle Rademacher on piano, with Warren Sampson playing too many stringed instruments to count) accompany the cast (who sometimes also pick up an instrument) on these silly songs with titles like "Buncha Naked Lumberjacks" and "Little Shanty in the Pines," which include some surprisingly lovely melodies, and great harmonies. The cast performs some appropriately hokey choreography (by Jon Andrew Hegge), with more or less enthusiasm as called for by the script.
Could I have lived my whole life without seeing Lumberjacks in Love? Yes. Did I have a good time for the 90-minute show? Sure! You can see this well-performed, silly, light-hearted comedy through September 25 in Anoka.
*Visit the Forest History Center in Grand Rapids to learn more about Minnesota's lumberjacks and the logging industry that helped to build the state.