"Doubt: A Parable" at Theatre in the Round 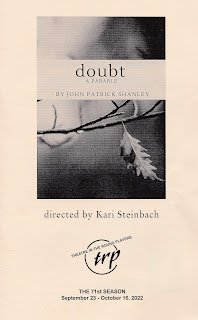 To open their historic 71st season, Theatre in the Round is presenting the 2005 Tony-winning best play Doubt: A Parable. In roughly 90 minutes, the intense and tautly written play explores ideas of faith, doubt, gender, race, class, sexual abuse, and the hierarchy of the Catholic Church that allowed such abuses to continue. Presented in a series of mostly two-person scenes, expertly written and well performed by this cast, the play is not so much about whether the accused is innocent or guilty, but about how we as humans deal with the doubt and uncertainty that exists in many areas of life. Doubt is truly a parable that can be applied to so many situations (especially today with so many sources of "truth" flying at us), with no clear answers, leaving the audience feeling a bit unsettled.
On the surface, Doubt is about sexual abuse in the Catholic Church and its horrifying habit of covering it up. But the beautifully and smartly written play digs so much deeper than that. Sister Aloysius is the principal of a Catholic school in 1964, shortly after Vatican II changed and modernized many traditions of the church. The stern nun believes in tradition and doesn't approve of new ideas like the ballpoint pen and "Frosty the Snowman." In contrast, Father Flynn is a young and modern priest, who coaches the basketball team and wants to include secular songs in the Christmas pageant. It's almost as if she goes out of her way to look for evidence of Father Flynn's wrong-doing. The young and "innocent" teacher Sister James obliges, when she shares that a student (who, perhaps not coincidentally, is the only Black student in the school) came back from a private meeting with the priest smelling of alcohol and visibly upset. What follows is a series of intense scenes in which Sister Aloysius tries to get Father Flynn to confess and be expelled from the Church. But since she's merely a nun, she is limited in her power within the patriarchy of the Church and is forced to use unconventional methods to accomplish her goal of removing Father Flynn. She eventually does so, but at what cost? Sister Aloysius, so firm in her beliefs, is now riddled with doubt. Doubt in Father Flynn's guilt? Or doubt in everything she's believed in her whole life and career?*
Theatre in the Round's in-the-round space works well with this small-cast play with just a few different settings. The action takes place in the center of a fish bowl with all eyes on it. About a quarter of the stage is a small garden where some conversations take place, the rest of it is Sister Aloysius' office, with a desk, a door, and a small table for tea and sundries. Father Flynn's pulpit is easily pulled into the space for a few sermon scenes. The lighting design helps to differentiate the spaces, and creates some beautiful shadows, as if sunlight is streaming through windows or decorative ironwork. (Scenic design by Devyn Becker,, lighting design by Bill Larsen.)
Director Kari Steinbach makes good use of the space and leads the strong cast through the dialogue-heavy play. The majority of the play is a three-hander: Miriam Monasch is a tough no-nonsense Sister Aloysius, a few cracks of doubt showing through; Corey Boe is an amiable Father Flynn, with perhaps something a bit sinister behind the shiny veneer; and Kelly Solberg is the inexperienced and intimidated Sister James who loses some of her innocence. MarShonda Austin appears in only one scene, as the mother of the boy in question, and leaves an impression as the mother who will do anything to secure her son's future. Characters are dressed appropriately in sedate '60s religious garb (designed by A. Emily Heaney).
Despite the popularity of the play and 2008 movie adaptation, to my knowledge Doubt: A Parable has only been seen on #TCTheater stages a couple of times in recent years (not counting the opera adaptation, which premiered at Minnesota Opera). Thanks to the oldest theater in Minneapolis for bringing us this excellent production of a new classic. See it at Theatre in the Round in the Cedar-Riverside neighborhood through October 16. And check out the rest of their season, with some great selections that are sure to be fun and/or challenging.
*Plot summary borrowed from what I wrote about a previous production.