"Real Women Have Curves" at Lyric Arts, a co-production with Teatro del Pueblo 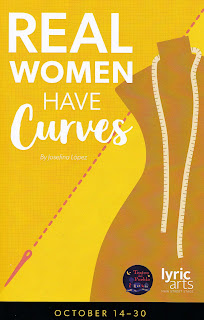 Like most good movies, the 2002 film Real Women Have Curves (that gave us America Ferrera) started as a play. Teatro del Pueblo, a #TCTheater Latino theater company that recently celebrated their 30th anniversary, produced the play this summer. Now, Lyric Arts is bringing that production (with much of the cast and creative team returning) to their stage in Anoka for their first ever co-production. I saw the busy Sunday matinee last weekend, and found it to be sweet, funny, and heart-warming. While the story and characters are specific to the Latinx community in East L.A., the themes of female friendship, generational conflict, and body shaming (turned into body positivity) are universal and so relatable. The endearing five-person cast makes us love these women and root for them on their journeys towards happiness and a better life. There's more than one reason to go to the Halloween capital of the world this month, and this charming play is one of them - but only two more weekends remain!Unlike the movie, the entire play takes place in the sewing factory owned by Estela (Abigail Chagolla), where her mother Carmen (Mariadella Belle Alvarez) and sister Ana (Bethmari Márquez Barreto) also work (the later very reluctantly). Along with Rosali (Xochi de la Luna) and Pancha (Alice D. Piar Acevado), they're frantically working to finish an order of dresses by the end of the week so that they'll get paid. It turns out Estela is in debt, and worried about being deported because unlike the other women, she doesn't have citizenship papers. She tries to play the tough boss, and cajoles the women into working instead of gossiping all day. Carmen shames her daughters for not being skinny enough, and wonders when they'll marry and give her grandchildren. But Ana and Estela have other plans for their lives. Despite the bickering amongst the women, they eventually band together to support each other and finish the order. The younger women learn a little about hard work, and the older women learn from the younger that being skinny isn't as important as living a happy and fulfilled life.Lelis Brito and Adlyn Carreras co-direct the piece with lightness, humor, and heart. Everyone in the five-person Latinx cast fully embodies their character with authenticity, speaking English sprinkled with Spanish. Maybe because this is their second run of the show, the sisterly relationship amongst the group is palpable. The detailed set is chock full of fabric, dresses, dress forms, sewing machines, and everything else needed in a sewing factory, with a small bathroom area that allows for quiet moments as the characters write in a journal or check themselves out in the mirror. The original play is set in 1987, but this version seems to be present time based on the inclusion of a smart phone. Other than that it really could be any time based on the costumes - working women's clothes, with a bit of personal flair. There's also a finale fashion show of beautiful dresses that flatter those titular curves, and this is a show where we get to see what's underneath the clothes - comfortable mismatched underwear, the kind that real women wear. (Scenic design by Mikha Alemán, costume design by Anna Brauch.)

Towards the end of the play the women start taking their clothes off, first because of the heat, then as a statement of body positivity. There's something really liberating and affirming to see women of different shapes and sizes feeling comfortable just hanging out in their underwear. As women we're taught to be embarrassed of the parts of our bodies that don't meet the impossible standards of female beauty. Our round bellies, our thick thighs, the flesh on our upper arms are all natural parts of a healthy female body, not something to hide or disguise, as this play reminds us. What a wonderful feeling to shed that embarrassment and (literally and figuratively) let it all hang out, as these characters do with such joy.

You can see the charming and heart-warming Real Women Have Curves for the next two weekends only. Bring your family, or a group of friends, or go by yourself to experience this beautiful and inspiring story.