"Next to Normal" by Wildwood Theatre at the Capri Theater 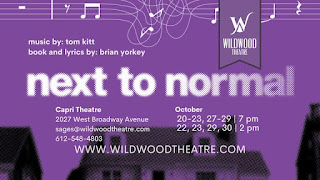 "The Wildwood Theatre unravels the stigma of mental health and mental illness by creating safe spaces where individuals can feel comfortable to ask personal questions, explore feelings, investigate social norms, and excavate truth." I'm not sure there's a better musical for this newish #TCTheater company to tackle than Next to Normal, the Pulitzer Prize-winning rock musical about a family dealing with mental illness. I was lucky enough to see a preview of Next to Normal on Broadway in 2009, and was blown away. I've loved it ever since, and seen several local productions, but it's been over seven years since I've seen it on stage. Wildwood's new production is so lovely and heartfelt, with beautifully sincere performances from the talented (and mostly unknown to me) cast, and the Tony-winning rock score sounds fantastic as played by the seven-person orchestra. It's playing for two weekends only at Capri Theater in North Minneapolis.
Next to Normal tells the story of what at first appears to be a "normal" American family, until the cracks begin to show. Diana and her husband Dan married young and started a family. They suffered a great tragedy that triggered Diana's bipolar disorder, which she's been dealing with for years. Everyone in the family suffers in their own way. Dan has to be the strong one as Diana falls apart, and therefore never gets the chance to deal with his own feelings about what happened. Their children, Gabe and Natalie, live in the shadow of the tragedy and are trying to deal with it on top of the normal problems that come with adolescence. Natalie's afraid that she'll follow in her mother's footsteps, and Diana's unable to be the mother that she wants to be. Diana hits rock bottom and undergoes ECT, aka shock therapy. It erases her memories, both the good and the bad, and she struggles to get her life and family back. Eventually they learn that there is no such thing as a "normal" family; all families look different and are dealing with their own unique issues, both big and small. The Goodmans struggle to find a way to get through theirs, and show us just what is possible with love.*
The role of Diana (for which Alice Ripley won a Tony) is a tough one, both vocally and emotionally, and Lux Mortenson has the chops to pull it off. Lux's voice is gorgeous and sounds effortless on this tricky score, with no false note emotionally either; they make the audience feel all the highs and lows of Diana's tumultuous journey. Lux is the star of this show and the center of a tight ensemble, who all really feel like a little family. Riley Webster is a good match as Diana's stalwart husband Dan, Joseph Klinker brings great youthful energy to the role of Gabe, Amani Yassin is empathetic as struggling teenager Natalie, Jack Bonko is sweet as her love interest Henry, and Bee Tremmel has some fun moments as a couple of Diana's doctors. Directed by Sarah Catcher, the show feels emotionally true and takes the audience on a gut-wrenching journey.
The seven-person orchestra led by Music Director Melissa Warhol sits just off the stage to the left, visible to the audience, and is fun to watch as well as listen to. This is not an easy score, with lots of complicated harmonies and overlapping lines, and there's a lot of it, with almost constant music and minimal dialogue. This team accomplishes it beautifully, I just wish the sound system were a little better to show off and highlight the blend of instruments and voices. The Capri Theater stage is framed by a neon outline of a house that changes colors, with simple white set pieces and a modular design creating different spaces within the house (lighting and scenic design by Claudia Errickson).
Only ten musicals have won the Pulitzer Prize for drama, and Next to Normal is one of them. For good reason - it tells a complicated story of a family dealing with relevant and relatable issues, with an intricate score that makes the audience feel all the feels. The cast and creative team does justice to this incredible work of music-theater that perfectly aligns with their mission of talking about and reducing the stigma around mental illness. See it at the Capri Theater through October 30 (click here for details and to purchase tickets, from $5 to $35).
*Plot summary borrowed from what I've written about previous productions.