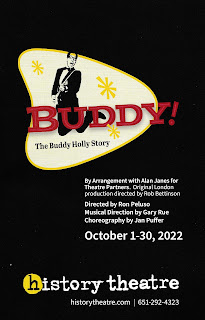 "That'll Be the Day." "Peggy Sue." "Oh, Boy." "Maybe Baby." These iconic songs by '50s rocker Buddy Holly are so much a part of our culture that everyone knows them, even those of us born long after his tragic death in a plane crash in 1959. Buddy! The Buddy Holly Story, a jukebox musical that uses Buddy Holly's music to tell his story, premiered in London in 1989 before crossing the pond to be seen on stages around the country. It's a fitting choice for the History Theatre, which brings varied and sometimes obscure pieces of Minnesota history to life on stage. What does Buddy Holly have to do with Minnesota? His doomed plane was on its way from Clear Lake, Iowa to Moorhead, Minnesota when it crashed, killing Buddy Holly, Ritchie Valens, and the Big Bopper. This production, which premiered at the History Theatre in 2005 and was remounted a few times, is back this year for the first time since 2015, with many returning cast members and creatives (including director Ron Peluso in his final season as Artistic Director). Buddy! is a fun celebration of the all too short life and career of this pioneering rock-and-roller, enjoyed equally by those who remember first-hand his life and death, and those who only know the legend (although the audience skews much more towards the former).* This run of Buddy! continues through the end of the month; click here for info and tickets.The show follows Buddy's life from his early days in Lubbock, Texas, breaking out of the country-western genre and creating something entirely new, through a failed recording contract, his unprecedented string of hit songs, a whirlwind romance and marriage, and finally, to that fateful last concert in Clear Lake, Iowa. Along the way we hear many of his best hits, along with other songs of the era, including Ritchie Valens and the Big Bopper's biggest hits, "La Bamba" and "Chantilly Lace," respectively. Despite the fun music, there's a slight sense of foreboding as the audience knows how the story ends, even as Buddy and friends move towards it unaware of their fate. But we're not down for long, a brief moment of silence with a single spotlight illuminating a frozen Buddy in his final concert, and we're back to the party, with several songs continuing through and after the curtain call to leave the audience in a good mood.*

Nicholas Freeman returns as Buddy, and fully embodies the rocker's spirit, voice, and trademark glasses. His experience with and dedication to this show are evident, as he brings this long ago legend to life and makes him seem like a real person (at some point an actor must age out of the role of someone who died at age 22, but at least Nicholas still has the energy and charisma to play the role). He's supported by a large and talented ensemble, including a bunch of students from the St. Paul Conservatory for Performing Arts - dancing on stage and in the aisles during some of the numbers, bringing an authentic youthful energy to the show.* Returning cast members Charles Fraser and Laurie Flanigan Hegge are joined by, among many others, Fernanda Badeo as Buddy's wife, Fernando Collado as Ritchie Valens, Brendan Nelson Finn as the Big Bopper, and T. Mychael Rambo, with a beautiful a capella rendition of "The Day the Music Died" to open the show.
Matt McIntyre and Adam Gauger not only play Buddy's band members, known as The Crickets, but they also play instruments (bass and percussion, respectively). Nicholas also plays guitar, and the three are joined by Brandon Petron with some wicked guitar licks, and assistant Music Director Jake Endres playing the piano hidden behind the set. The whole sound is fantastic on these familiar songs, and refreshingly for a musical, the actors are not miked, but use retro style microphones for the big numbers. This also allows for a few lovely unplugged moments, including Buddy singing to his new wife. The stage is set up to look like a '50s stage with projections of date and location above it, and the period costumes include poodle skirts, crinolines, and bow ties galore.* The fun choreography includes lots of doo-wop swaying and fast jiving, and the extended finale has such great energy it makes one want to don a poodle skirt and do the jive. (Music direction by Gary Rue, scenic design by Justin Hooper, sound and video design by C. Andrew Mayer, costume design by Kathy Kohl, choreography by Jan Puffer.)
Celebrate the life and music of Rock & Roll legend Buddy Holly at the History Theatre in downtown St. Paul, now through October 30.
*Much of this post is borrowed from my review of the 2014 production.