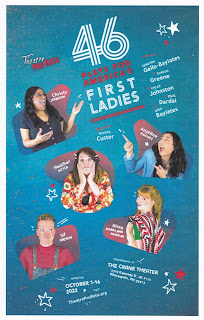 If I'm late posting this review, it's because I went down an internet rabbit hole about the fascinating 46 (or more) First Ladies. Because the new play 46 Plays for America's First Ladies, by virtue of covering all of these women in about two hours, only gives us a brief hint at each one of them. Someone needs to write a musical about one or more of these women* (looking for a next project, Lin-Manuel?), maybe Harriet Lane, adopted daughter of "lifelong bachelor" James Buchanan, or Lucy Webb Hayes, who accomplished so much that even five people talking at the same time couldn't cover it. Written by five different playwrights, this yet-to-be-published and up-to-the-minute play (ending with Jill Biden, 2021-?) is mostly a comedy, but not without some social and political commentary (not-so-fun fact: many of the early First Ladies owned slaves). It's a funny and fascinating whirlwind trip through the history of this country, as seen through the eyes of the women behind the men who were presidents. With some hope that maybe one day, this country will get with the times and elect a woman to lead outright, instead of just from behind.From Martha Washington to Jill Biden, the play chronologically covers the women who did not ask for this job, and also how the job has changed and developed over the years, from hostess and decorator, to advocate for social causes. Each woman's name and years of office are displayed at the back of the stage, along with illustrative graphics, and occasional actual quotes from the women or their husbands. A five-person cast (Christy Johnson, Heather Meyer, Nissa Nordland Morgan, Sif Oberon, and Anjeline Ramirez) embodies all of the First Ladies (and a few of the presidents), passing a scarf to identify which is the lady in question.

Plays vary in style and tone, from wacky comedy, to a stand-up routine, to a folk singer at a bar, to a simple list of facts. From famous First Ladies (Jackie Kennedy and Eleanor Roosevelt) to those whom history barely remembers, they each have their moment. Some of them worked for women's suffrage, many owned slaves, some kept house, some advised their husbands, some died young, others survived their husbands and went on to accomplish many things (one of my google searches told me that eight presidents have died in office, making it a job with a shocking 17% mortality rate). And then there's Edith Wilson, who pretty much acted as the president when her husband was all but incapacitated from a stroke, which the authors acknowledge is not great precedent, even if she was kind of awesome at it. Every First Lady brought something different to the role, and is remembered for different things, and the play unflinchingly tackles all of it.

#TCTheater's favorite funny woman Shanan Custer directs the piece, bringing out all the laughs, and balancing them with some more serious, poignant, or biting moments. 46 plays means 45 scene transitions, and they're all quick and smooth.  Rhiannon Fiskradatz has written some original music of varying styles to go with the half dozen songs in the piece, adding to the variety. Fun and period appropriate set pieces and props on the sides of the stages are brought in when needed, and actors are dressed in basic casual modern wear, with added pieces to signify characters, including a stars-and-stripes jacket for the president. Projected images, dates, and quotes help guide us through the years and provide some additional context or tone. (Set design by Todd Edwards, costume design by Mandi Johnson, props design by Madeline Achen, graphic design by Max Lindorfer.)

See this whirlwind romp through American history at the Crane Theater in Northeast Minneapolis, weekends through October 16, plus a pay-what-you-can Monday performance (click here for more info and to purchase tickets).