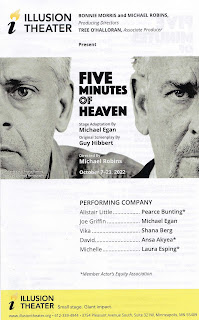 The world premiere stage adaptation of the 2009 Irish film Five Minutes of Heaven tells the story of two men affected by the period of Northern Ireland's history known as "The Troubles." Over 3500 people were killed in the 30-year long and complicated conflict, but this is the story of just one of them. Based on a real-life murder and an imagined meeting between the killer and the victim's brother 35 years later, the taut 75-minute drama is riveting and tension-filled and at times difficult to watch. The adaptation by Michael Egan and the excellent five-person cast (including the playwright himself) beautifully and painfully bring this difficult story to life, and highlight the relevance of the historical events to the here and now. Continuing through October 23 in Illusion Theater's intimate performance space at the Center for Performing Arts.
In 1975, 17-year-old shot Alistair Little shot and killed 19-year-old Jim Griffith in his home in a suburb of Belfast, witnessed by Jim's younger brother Joe. The opening scenes of the play (after a montage of news footage) are of Alistair and Joe, 35 years later, telling their separate but related stories about that night. The rest of the play takes place in a studio in Belfast, where an American documentary crew is filming the first meeting of these two men for a series called "One on One." The two men are interviewed separately until the pivotal planned meeting, which is highly staged and choreographed. After a dozen years in prison, Alistair has made a life of helping others resolve their conflicts, but hasn't been able to resolve his inner conflict about the murder, which at the time he felt was the right thing. Joe also hasn't let go of the past and has revenge on his mind, and at the last minute decides he can't go through with the meeting, throwing the film crew into chaos. The two men eventually do meet, alone, but I'm not sure if either finds what he's looking for.
Director Michael Robins keeps the tension building through the play, culminating in the meeting that is as intense as we expect (with some very real-looking fight choreography by Eric D. Howell). As Alistair and Joe, Pearce Bunting and Michael Egan both give raw and powerful performances, letting us see the conflicting emotions in both of these men (with believable Irish accents thanks to dialect coach Grace McTague). As the film crew, Laura Esping is the brisk, efficient, superficially caring director (impressively handling the camera and other technical equipment); Ansa Akyea is the host of the show, turning on the charm for the camera; and Shana Berg is warm and genuine as the PA, the only one who truly seems to care about the subjects.
Proving that Illusion Theater's new space at the Center for Performing Arts is truly a black box theater, the stage and audience orientation is turned 90 degrees from how I've seen it previously. For this show the stage is at one end of the rectangular space with a traditional proscenium audience set-up (rather than the stage in the center, creating a mini-thrust with the audience). Michael Hoover's film studio set is crisp and modern, with a wall and door separating the two areas and the two sides of the conflict. The technical equipment (cameras, lights, microphones) looks very real, with the big TV spotlight creating some interesting effects. Characters are dressed in modern professional wear that help to define the characters. (Props by Ursula K. Brown, lighting design by Garvin Jellison, costume design by Amber Brown.)
In addition to exploring themes of generational trauma, restorative justice, forgiveness, and reconciliation (all topics that are evergreen in our world), the play also shows how the media can exploit real people's tragedies for entertainment or ratings. Bringing these two men together to attempt to heal may have been a good idea, but it feels a little icky to film it so the whole world can watch. Maybe this fictional show should employ a therapist or other expert to help the participants navigate the emotions of the day.
I haven't seen the film (yet), but this adaptation stands on it's own as an excellent Irish drama with universally relevant themes. Five Minutes of Heaven plays Wednesdays through Sundays, closing on October 23.