"Of Pigs and Pianos" at the Jungle Theater 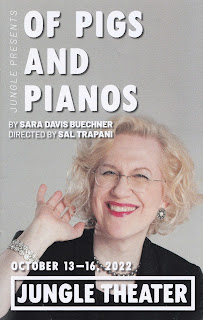 The Jungle Theater's 32nd season includes three original productions and two "Jungle Presents" offerings, in which they host shows from elsewhere. The first of these is a one-weekend-only engagement of the one-woman show Of Pigs and Pianos. This is the amazing story of Sara Davis Buechner, a transgender woman who transitioned in the middle of her career as a classical pianist - performer, composer, and teacher. She probably could talk and play for hours on end, but instead, she's compressed her life story into a little over an hour, succinctly conveying her trials and triumphs through stories and music. It's a unique and inspiring story, and some of the best piano performance I've ever had the privilege to witness. Only four more shows remain - this weekend at the Jungle in Uptown (click here for details and tickets).
Between performing piano pieces from Mozart to Chopin and more, Sara tells us her story. She had a talent and love for piano from a very early age, beginning lessons at age four, going on to study at Juilliard, and winning piano performance competitions around the world. But contrasted to that success was a search for who she really was. Also from a very early age, despite being born into a boy's body, she identified with women and longed to be like them. Little David wore a purple "Mozart jacket" (her favorite) and frilly shirt to school, only to be teased and sent home. She learned to suppress those feelings, only to end up contemplating suicide. At the height of her career, she had a moment of realization and finally knew who she was, and began the transition process. After a dizzying and sometimes horrifying array of therapists and doctors, David became Sara, and she basically had to start over in her career. She found acceptance in Canada and Japan, and began to perform, teach, and record again. There are a lot of dark times in her journey, but she tells her story with raw honesty, humor, and heart, endearing her the audience.
Sara's story is supported with photos displayed on the back wall of the theater, with a sort of impressionist painting filter that gives them a dream-like quality. Her playing is pretty dreamy too. From soft and gentle, to fierce and angry, she performs every piece not only with technical precision, but also a stunning array of emotion and nuance. I recommend sitting on the left side of the audience, so you can watch her hands as they bounce or float across the keys with sometimes dizzying speed. She communicates her story and the emotions of that story as much through her music as through her stories. A few simple props and set pieces help with the storytelling on the mostly bare stage that is dominated by a gorgeous grand piano.
Of Pigs and Pianos (the title refers to her dream of what she wanted to be when she grew up - a pig farmer and a piano player) is a unique and inspiring solo theater/music/storytelling piece. Thanks to the Jungle for bringing the incomparable Sara Davis Buechner's story and music to #TCTheater, even if only for one short weekend.