Josh & Brad in "We Only Murder in THIS Building Featuring: Brad & Josh!" at Bryant-Lake Bowl 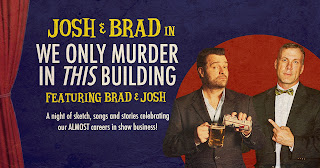 It's been a year since I've been to Bryant-Lake Bowl, the quirky little theater at the back of a bowling alley that's home to some of the most creative and risk-taking performances in town, and I've missed it. Josh & Brad in "We Only Murder in THIS Building Featuring: Brad & Josh!" is as much of a love letter to the BLB as it is a celebration of the friendship and creative partnership of Josh Carson and Brad Erickson. In a series of "sketches, songs, and stories," they talk about their separate moves to L.A. working on the oddest of jobs, and their return home to Minnesota, where they met and forged a comedic partnership. They've performed together and individually in a multitude of shows at BLB, the Minnesota Fringe Festival, and elsewhere, the most famous of which is the little show they did ten years ago that has become a smash hit annual event - A Very Die Hard Christmas. You can experience the origin story of these two goofballs in three more shows, or check out other upcoming shows at the theater that supports them and many other artists in #TCTheater, giving them a safe place to explore and create.
Though the title of the show references the delightful Hulu comedy Only Murders in the Building, the show isn't about that (although we do get a Martin Short impression). They tell some hilarious, fascinating, and horrifying stories about life in Hollywood (that time Josh was an extra on Grey's Anatomy and did a scene with McDreamy himself, that time Brad waited on Carrie Fisher in his job as a singing/performing waiter). They do some fun and silly pop-culture filled sketches (an old Michael Myers of the Halloween movies, the pitch meeting for Jaws 4, Brad in a one-man show of 12 Angry Men with 12 different impressions). They sing a few songs, including the running joke that Josh can't sing (a "Do-Re-Mi" parody song about beer that's almost as clever as local a capella group Tonic Sol-Fa's "Do-Re-Mi" parody song about beer, and a lovely ode to the BLB). They talk a little bit about the success of A Very Die Hard Christmas, which took a few years to build, and how even though once it became successful and they had offers to do it in other theaters around town, they continue to do it at BLB because that's their home, and the place that made it possible for them to become the artists they are.
Brad and Josh work together very well, and their 15 years of writing and performing together (and 10 years of friendship, ba-dum-bump) shows on stage. They pick each other up and play off of each other in this loose and playful show. The great thing about them is that they go 100% into the joke or the sketch, whether it works or not, they believe it and follow it through. And usually it works.
Josh & Brad in "We Only Murder in THIS Building Featuring: Brad & Josh!" performs tonight and next Friday and Saturday. You can find BLB's full schedule of theater, music, and comedy shows on their website. The early show (there's also often a late show) typically starts at 7 and is about 90 minutes, so you can get home and go to bed early go out and do other fun things with your friends. Doors used to open an hour prior to showtime, but now only open 30 minutes prior (I was told it was because post-covid not many people are coming in for dinner, so let's all show up at 6:30 and order dinner and maybe they'll start opening earlier again!). You can order from their delicious and varied menu and full bar in the theater before and during the show, so it's a fun and easy dinner-and-a-show option.
Here are some other upcoming theater-adjacent shows: