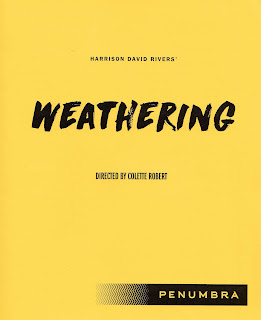 Prolific #TCTheater playwright Harrison David Rivers has written another beautiful and relevant story about humans. Weathering was commissioned by Penumbra as a response to the growing awareness of racial disparities in maternal health. A quick google search reveals staggering statistics around the racial disparity in infant and maternal mortality in this country - two and three times higher for Black mothers compared to White mothers. Weathering puts a human face on those statistics and lets us experience the tragedy of one family, as well as the healing that can happen within a community.
The play opens with Lena alone in her kitchen, packing up baby things in a way that makes it obvious she's suffered a devastating loss recently. Her husband comes in, things are awkward between them, she insists she's fine, and he leaves for work. She's then visited but a number of women separately, but sometimes in overlapping scenes. There's a bit of magical realism, as the lights flicker and the walls shake, and we're instantly in the next conversation, sometimes with the previous visitor frozen in place. Lena talks about her loss (or doesn't) with varying levels of candidness with her mom, sister, friend, neighbor, and "church lady." Eventually all six women are in the room together, sharing their stories of pregnancy, children, and loss. It's a beautiful and healing thing to see Lena surrounded by a community of Black women supporting her, teasing her, encouraging her, loving her as she goes through phases of rage, grief, confusion, and maybe even hope.
This excellent cast is led by Vinecia Coleman as Lena, with a beautiful portrayal of the complexities of this kind of grief, expressing the full range of emotion from numbness to anger and everything in between. JuCoby Johnson has a few brief lovely scenes as her husband, but this show belongs to the women. Greta Oglesby is wonderful as the warm and supportive (perhaps at times a little too much) mother, and Ashawnti Ford brings the humor as Lena's sister, the three creating a believable little family. Also great are Ashe Jaafaru as the sometimes bumbling neighbor; Austene Van as the church lady with a casserole and a prayer for every occasion; Oyeman Ehikhamhen as Lena's friend, the only one she can truly be real with; and a young Dior Gregory in a late mysterious appearance.
The chic kitchen set feels real and functional, with a large center island, trendy light fixtures, stocked refrigerator and cupboards, and real food that the actors really eat (pickles and Cool Whip?! No). Stairs ascend to the unseen upstairs, and large windows and a sliding glass door look out on the backyard (scenic design by Chelsea Masteller Warren). Characters are dressed in detailed and specific outfits that tell us who they are, from Lena's comfy clothes that signify she hasn't left the house in a while, to the church lady's neat denim patchwork dress, to Lena's sister's fabulous green pantsuit and gold pumps (costume design by Trevor Bowen). The sound and lighting design, as well as some special effects, create some eerie moments - is it an earthquake, or is it a manifestation of Lena's emotions? (Sound design by Ahanti Young, lighting design by Kathy Maxwell). I would complain about putting an intermission in a show that would be 90 minutes without it, except that it's obvious why it's necessary. Every moment is full and meaningful, with a nice balance between humor and heaviness under Colette Robert's direction.
Weathering brings light to the horrifying racial disparity in the area of maternal health in this, the "greatest country in the world," in a way that shows us the humanity of those affected (even if it does include a recitation of facts that feels a little too pedantic). The beautiful writing and performances make these characters feel real and relatable, as we mourn and laugh with them.
Weathering continues through November 6 at Penumbra Theatre in St. Paul, and watch for special events and discussions related to the themes of the play to be held during its run.