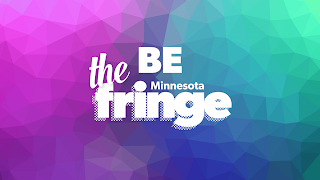 It's the closing weekend of the first fully live and in-person Minnesota Fringe Festival in nearly three years, but my fringing time is done, at least until next year. I've moved on from my favorite theater festival to my favorite music festival (Storyhill Fest in Deerwood). Sitting in a coffee shop in Crosby, reflecting on the eperience of the last seven days, in which I saw 23 short pieces of theater / music / storytelling / dance / spoken word / any combination thereof, the overwhelming feeling is gratitude. Gratitude that despite a global pandemic, financial issues, and cancelled performances, adventerous audiences (of which I consider myself a part) were able to gather to experience adventurous art (of which I consider myself an admirer). After two years of (mostly) virtual festivals, I didn't realize how much I missed this until I was back. To be immersed in a life in which the only goal is to see as much theater as you can, to eat, sleep, and breathe theater, is a theater blogger's dream. But the best part of Minnesota Fringe is the community feeling it engenders. Walking down the street, particularly in the Cedar-Riverside hub, and seeing so many theater-goers and theater-makers there for the same purpose, and chatting about theater with artists, friends, and strangers, is something that only happens at Fringe. Though I only saw 23 of the 100+ shows, and I know I missed some great shows (follow my friends at Lettered in Theatre and The Stages of MN, as well as the OG Fringe blogger Single White Fringe Geek, for continuing coverage), that tiny feeling of regret and FOMO is overwhelmed by feelings of satisfaction and happiness that Minnesota Fringe is back! Read on for my favorite shows of this year's fest, and visit the Fringe website (sometimes slow but very informative) for today's schedule. There's still time to get out there and #seethefringe, #bethefringe, #supportthefringe!
My Favorites (in alphabetical order, click the show title for full review and show details):
Honorable Mention  (in alphabetical order, click the show title for full review and show details): BURR: A NEW MUSICAL, CHANGING THE NARRATIVE: CLIMATE STORIES FOR JUSTICE, A DAY WITH THE NEWHEARTS, EROTICA FOR HOUSEPLANTS, LIFE UNDERGROUND, THE MAN FROM EARTH, PIÑATA, THE REAL BLACK SWANN, SWORDS & SORCERY.
Happy fringing!