Minnesota Fringe Festival 2022: "Who's Afraid of Winnie the Pooh?" 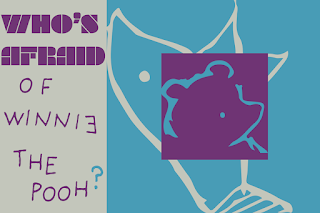 Title: Who's Afraid of Winnie the Pooh?

By: Clevername Theatre
Directed by: Alexander Gerchak
Location: Theatre in the Round

Summary: A retelling of the classic Edward Albee play Who's Afraid of Virginia Woolf with the characters from Winnie the Pooh.

Highlights: The key to making this premise work - Pooh, Piglet, and Christopher Robin as characters in Who's Afraid of Virginia Woolf, is to play it with deadpan seriousness. And this cast does just that. In this version of the story, Winnie the Pooh (Thomas Buan) and Piglet (Stephanie Johnson) are the unhappily married couple who invite the new couple in the Hundred Acre Wood, Christopher (Nick Hill) and Hunny (Stephanie Callaghan), over for cocktails. The cocktails being honey, or nectar, or sweetened condensed milk, on which out party-goers proceed to get drunk, which is when things get dicey. They take turns telling stories that may sound familiar to Winnie the Pooh readers, only with a decidedly more sinister turn. Playwright/director Alexander Gerchak doesn't miss an opportunity in the mashing up of these two familiar but very different worlds, dropping in lots of little nuggets. The mid-century costumes and design are spot on, characters dressed in the familiar color (Pooh is in faded yellow, Piglet in pink) with animal ears to remind us where we are. The vintage bar is well-used, and much honey and sweetened condensed milk is consumed over the course of the play. This unexpected, genius, and well executed mash-up is the kind of thing that can only happen at Fringe, and the reason that we love Fringe, and the reason that we need Fringe!
Read all of my Fringe mini-reviews here.