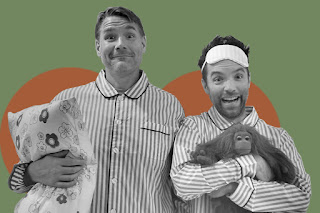 Highlights: I would happily watch Levi Weinhagen and Joshua English Scrimshaw do anything, which is what most of this show is. Just watching them put on pajamas and get into bed is hilarious. It's just good old-fashioned comedy, the kind that works in any era, geography, or age of audience, in the Buster Keaton silent film kind of style. I'm certain these two go home with bruises and abrasions every night the way they heedlessly throw their bodies around the stage, all for the sake of comedy. They're joined for part of the show by Sulia Altenberg as a tough chain-smoking Tooth Fairy. They keep hitting each other in the face to make their teeth fall out to get more money out of her, which does not make her happy, culminating in a ridiculous slow-mo fight scene employing tools of dental hygiene. While without verbal dialogue, this show is far from silent; composer/musician Rhiannon Fiskradatz creates a soundscape for the show on guitar, percussion, and various other instruments, the sounds making the physical comedy even funnier. At one point the boys are "locked" off the stage and find themselves in the audience, running around gleefully and playfully interacting with the audience. Eventually all four performers end up back on stage, along with a few stragglers they've picked up in a conga line through the audience. This show is just pure joy and delight and laughter. If you don't want your face to hurt from laughing too much, you should avoid this show at all costs.
Read all of my Fringe mini-reviews here.