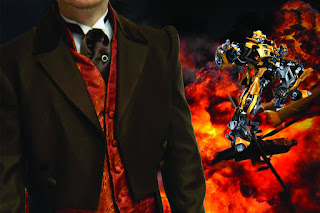 By: Snikt! Bamf! Thwip!
Created by: Tim Wick & Jami Newstrom
Location: Theatre in the Round

Highlights: Confession: I had to google Michael Bay to see what movies he was involved in, so I was definitely there for the Bridgerton of it all. And I was very satisfied in that regard. The story revolves around our favorite BFFs - Penelope Featherington (Angela Fox) and Eloise Bridgerton (Alison Anderson). There's a dashing suitor known as Viscount Studleywright (Michael Bloom), a meddling mother (Breanna Cecile), and even a voiceover by Whisledown (Dawn Krosnowski). But here our heroines also have to deal with the evil Lord Montjoy (Edwin Strout) and his inept accomplice (Samuel Poppen) trying to sabotage the Bridgerton ball and therefore the entire family's reputation. There's a running comentary about how the men simply do not hear the women (funny because it's true), and the benefit of guilds (i.e., unions). About halfway through the show, it turns from Bridgerton to Michael Bay, with our characters losing their charming British accents and instead speaking and acting like crass Americans. There are explosions, and fights, and transformers! But in the end, the two friends come back together and vow to take their lives, and their stories, into their own hands. The Fringe isn't the Fringe without a trendy pop culture spoof, and this show fills that spot nicely.
Read all of my Fringe mini-reviews here.