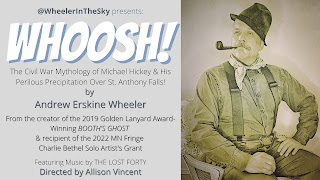 Summary: A compelling historical solo show about Minnesotans who fought in the Civil War, the history of St. Anthony Falls in Minneapolis, the indigenous people of this land, and how all of the above are related.

Highlights: Once again, Andrew Erskine Wheeler throws himself completely into this character, or rather characters. He starts the tale as an Irish immigrant who followed his brother first to the logging camps of Northern Minnesota, and then to the Civil War. He tells his story directly to the audience, how he was injured in the war, was given a job after the war by his sergeant (who, spoiler alert, is Andrew's ancestor), and survived a tumble over the falls. Andrew personifies all of these people, with a change of accent or accessory to his period costume. Into this story he brilliantly weaves the history of the falls (known as Owamni Yamni by the Dakota and Gakaabikaang by the Ojibwe), Indigenous and White people's stories and legends surrounding it, the infamous painting in the Minnesota State Capitol about Father Hennepin's "discovery" of the falls (read more about that here), and the horrors of war and its aftermath. With direction by Allison Vincent, the show seamlessly flows from one story to the next, one character to the next, and might possibly utilize the most props in the Fringe, which Andrew flawlessly manipulates to help tell the story. He also employs jokes and modern references, and a few charming moments of fourth wall breaking, and brings the audience to tears with his passionate and emotional portrayal. At the end of the show, he offers an opportunity for a donation to the Minnesota Indian Women's Resource Center and encourages the audience to seek out Native stories. Rather than another White man telling a story that isn't his to tell, he's telling stories from Minnesota's shared and complicated history, and encouraging the audience to acknowledge, explore, and understand all parts of our history. WHOOSH is a thoughtful and detailed show that's as fun and engaging as it is educational and inspiring.
Read all of my Fringe mini-reviews here.