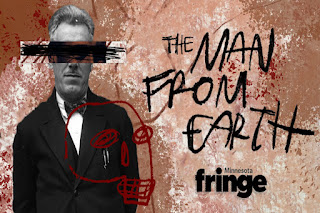 Title: The Man From Earth

Summary: The story of a cave man living in modern times who decides to tell his friends, colleagues, and associates who he really is.

Highlights: "Elliptically Clever and So Dumb." Spiral Theater's tagline pretty much sums up this show. The cave man now known as John Oldman's millenia long story is clever and dumb and very funny. Directed by Kevin Duong, the four-person cast (Noah Branch, Liv Stewart, Lydia Moran, and playwright Kyle Munshower as Oldman) perform in a very consistent serious and overly dramatic tone. There's so much fun word play (ten years vs. tenure, quarters vs. quarters) and references to obscure and well-known events throughout history. A little like Forest Gump, Oldman was present at many important events, from Jesus Christ's crucifixion to Lincoln's assassination. Inspired by the 2007 film of the same name (which I haven't seen but now want to), but taking on a clever, funny, and silly life of its own.
Read all of my Fringe mini-reviews here.