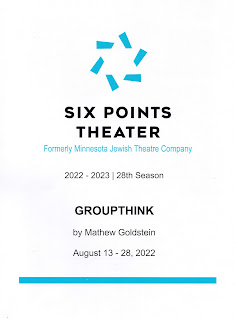 The 2022-2023 #TCTheater season officially begins after Labor Day, but Six Points Theater is bringing us a juicy appetizer prior to the start of the regular season. The world premiere new play Groupthink is a darkly funny and so-real-it's-scary look at the world of PR and social media. A group of coworkers at a PR firm plot and plan to make their horrible clients look better to the public, and the scary part is - it works. In what would be a tight 90-minute-no-intermission play, if not for the intermission, the talented cast and crisp design bring us right into this world that doesn't seem so far from our own.
In Mathew Goldstein's smart and funny new script, well directed by Robert Dorfman, the story takes place entirely within the offices of the PR firm TopDown Strategies and centers on two young employees David (Pedro Juan Fonseca) and Kevin (Damian Leverett). The two are starting to be disgusted by the work that they do, which includes trying to improve the image of a rich CEO who poses nude for photos with animals he killed. Unfortunately, things only get worse from there, as the head of the company Mark (John Middleton) wants to start a coalition backed by corporations that seemingly is doing good in the world, but really is just a PR machine for the corporations. When corrupt landlords and Big Pharma aren't big enough, he goes after even bigger, more despicable entities and manages to come up with the biggest PR hurdle to date. For him and and his right-hand-woman Elaine (Joanna Harmon), it's all about the work and the money, with no moral quandaries. Hard-working employee Rebecca (Lynda Dahl) is a bit disgusted by the clients, but believes that doing well on this case will give her the career boost she needs to do what she really wants to do. But David and Kevin just can't stomach the idea, and decide to sabotage these clients, willing to sacrifice their jobs to do so. Unfortunately, like in The Producers, everything they do to make the project tank only makes it go well; they have underestimated the power of social media and a well-planted story to manipulate the public into believing something they otherwise wouldn't. Scary indeed!
Six Points' theater home at Highland Park Community Center has been transformed into the chicest conference room I've ever seen by Michael Hoover, natch. Crisp lines, coordinating colors, modern desks, rolling office chairs, and projections (designed by Tom Burgess) populate the space, all of which is well utilized. Characters are dressed in modern business casual chic, because nobody wears a suit to the office anymore, but they still look professional and stylish (costume design by Barb Portinga). The cast brings these mostly unlikeable characters to life and let's us see their humanity, except maybe for Mark and Elaine, who are deliciously callous.
Wikipedia defines groupthink as "a psychological phenomenon that occurs within a group of people in which the desire for harmony or conformity in the group results in an irrational or dysfunctional decision-making outcome." This play illustrates the dangers of that concept, which could refer to the culture within the PR firm, as everyone goes along with the work that they do, making bad people look good. It could also refer to the general public, and in particular, the ability of PR teams, political parties, celebrities, or cult leaders to manipulate groups of people into believing what they want them to believe, no matter what's actually true.
See Groupthink at Six Points Theater through August 28.