After seeing 23 shows in 7 days at the Minnesota Fringe Festival, I headed Up North to see 10 concerts in 2 days at Storyhill Fest, the best little folk music festival in Minnesota. I attended Storyhill Fest every year from 2010-2014 (I think I just missed one in 2009), after which it went on hiatus for a few years. Storyhill Fest was scheduled to come back in 2020, but we know how that story goes. Finally, in 2021, I returned to Clearwater Forest Camp in the Brainerd Lakes area for two glorious days of music, and it was like the past 7 years slipped away. It was such a welcome return to a favorite place and event, especially after the many long months without any performing arts in 2020-2021. This year was the second year of this second incarnation of the Minnesota Storyhill Fest (similar fests have also been held in Storyhill's native Montana in the past), and once again it was a joyous celebration of music and community. There was vague mention of "next time" without any firm details, but follow Storyhill on Facebook or sign up for their newsletter for the latest information about the next Fest, and other upcoming Storyhill concerts. Read on for photos and info about the 8 additional artists who performed, all beautifully unique variations of the folk singer/songwriter genre, and click on their names to be taken to their website where you can listen to and/or buy their music, and find out about upcoming performances. Several of them are Minnesota-based, and if not, they'll come around again soon. 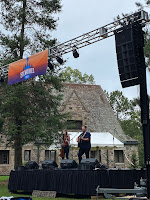 Chad Elliott and Kathryn Severing Fox
A last-minute replacement at last year's fest, Chad returned this year to open the festival with a 4pm show on Friday. He brought along his recent collaborator Kathryn; the two will be releasing a new album this fall, and they sang the lovely title song "Untested Wings." I enjoyed the Iowa native's "authentic lived-in voice" and storytelling style last year, and he's even better this year with Kathryn's beautiful harmonies, fiddle playing, and additions to the songwriting. I look forward to hearing their new album. 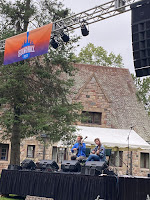 Bad Posture Club
I hadn't heard of or from this Minneapolis duo, originally from Washington State, until their sound check before the 5pm show, and was immediately intrigued by their unique sound. As performers, Maren Day and Morgan Kavanagh are super chill and mellow, seated on chairs playing banjo and guitar, just casually sharing some songs and stories. As vocalists they both have beautifully unique voices that blend together to create something quite mesmerizing, their tight harmonies creating a singular sound. I've been listening to their 2021 album A Place Between, just their second, for the last few days, and am still mesmerized. And for the record, they have fine posture. 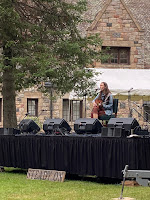 Ira Wolf
Ira's crystal clear vocals and storytelling permeated even into the long concessions line at the back of the audience. Originally from Montana (where she no doubt met the guys, who have been trying to get her to the Fest for years), she tells stories and sings songs about living in a van named Ruby and traveling around the country, eventually ending up in Nashville. With a personable and inviting style, it feels like we're sitting around her living room (or in her van) while she regales us with poignant and relatable songs (she joked that her goal is to make us cry). Her song "Sunscreen" went viral on Spotify five years ago, which allowed her to pay her bills and continue making and sharing beautiful music. 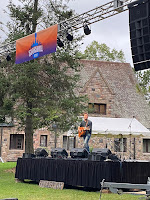 Ben Kyle
Founder of the band Romantica, Belfast-born and Minneapolis-raised (since the age of 13, which fortunately is old enough to have retained the accent), Ben is a charmer and a storyteller. Whether he's singing one of his songs about growing up in Ireland, or the Mississippi River, or a tribute to Graham Parsons, or telling a story between songs that has nothing to do with anything other than entertaining the crowd, he had us in the palm of his hand, even if he did bring on the Ireland-like misty rain. His songs can be funny or heart-breaking or poignant, or anything in between. 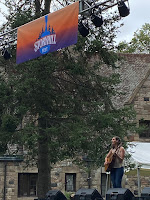 Edie Carey
I last heard Edie's "warm luscious tone" at the 2014 Storyhill Fest, when she was performing her lullaby collection with Sarah Sample, but she's also an accomplished solo albums with a half dozen or so albums. Through her songs, she forges an emotional connection with the audience, sharing herself and her very personal stories, like her journey through infertility, and a serious car accident with her children that "ripped away the veil of security." Her new album, appropriately titled The Veil, came out this June and has also already made it onto my playlist. 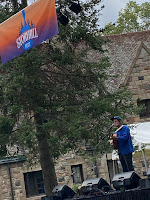 J.E. Sunde
This ecclectic and dryly funny singer/songwriter from Minneapolis (originally Wisconsin) writes one-of-a-kind songs with thoughtful, clever, and poetic lyrics, which he sings with his one-of-a-kind voice (almost nasally in a good way, at times reaching into the higher octaves). He has an interesting turn of phrase and I found myself writing down many quotes, from "incorporating the plague into our life," to being honest with someone and discovering that "whatever the weird thing that you think is particular to you is the most normal thing in the world," and succinctly summing up the entire weekend: "gathering together to celebrate the beauty of songs"
(because yes, I'm the nerd who takes notes at a music festival). His most recent album (also now in my playlist) is a collection of love songs celebrating the many different kinds of love. 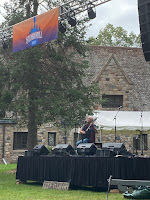 Peter Mayer
I've been a fan of Minnesota's own Peter Mayer longer than I've been a fan of Storyhill. I first heard them both the same way - on the MPR Morning Show with Dale and Jim Ed (fun fact: the first time I heard Storyhill perform live was with the Morning Show at the State Fair, circa 2007). After Peter received one of the biggest ovations of the Fest, venerable emcee J Matt said something like his music hits you right in the soul, and I couldn't agree more. I have every one of his albums (many of them actual physical CDs) and have seen him live many times over the years. There's something about his sciencey/nature-loving/spiritual songs that I really connect with. He sang a couple of old favorites (including his signature song "Holy Now"), but the prolific songwriter sang mostly new songs (which apparently he's having a little trouble figuring out how to deliver to listeners in this new age of music - just make an album Peter, we'll buy it!). In between songs is his charmingly incessant tuning, and sharing stories about what inspired the songs and what they mean to him, which makes them mean more to us. There's simply no one like Peter Mayer (even if one of Jimmy Buffet's band members does share his name, and is a pretty great singer/songwriter himself). 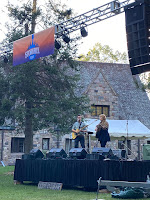 The Sea The Sea
This charming husband and wife duo, Chuck and Mira Costa, hail from upstate New York and made their debut at Storyhill Fest in 2013 shortly after the release of their first album. They're finally back (after an accident cancelled their plans last year), now with three full albums under their belt, the most recent released in 2020, plus a couple of EPs and a whole lot of new songs. Playing electric and acoustic guitar, tambourine, and various other percussive sounds, they sing the most gorgeous harmonies, their voices weaving together magically. Like everyone in this festival, they're amazingly talented songwriters, vocalists, and musicians.

I've already added 6 (and counting) albums to my collection, but that's why I go to Storyhill Fest - to be introduced to new music and artists. It's like when Netflix says - if you like this, you might like this. Only with music, and better because it's personally curated by humans rather than an algorithm. I have many Storyhill playlists, and the 2022 playlist is shaping up to be one of the best. 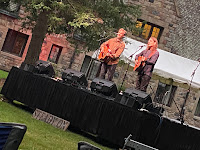 Storyhill
As is the tradition, Storyhill performed the last show of both nights of the festival (as well as other shows for various groups of attendees). They sang about 20 songs each night, one favorite after the next, and still didn't sing even half of the songs in their repertoire. And even though I and most of the people in the audience had heard these songs so many times we could sing along to every word (we didn't, we were too busy listening), we're always hungry to hear them again. Chris and Johnny have been singing some of these songs for literally 30 years, but they still find a freshness and a connection with them. After all that time, singing and writing and performing together since they were teenagers, they've developed an easy and natural stage presence, with banter between songs that sometimes goes places even they're surprised about. All that familiarity, time, and practice has bred an almost sibling harmony between them, seemingly effortlessly harmonizing with each other, almost reading each other's minds (except when they forget the lyrics or the key, which only delights the audience more). Chris and Johnny are so easy-going, so natural, so personable, and after 30 years (about half of which I've been listing to them), they truly have never sounded better. 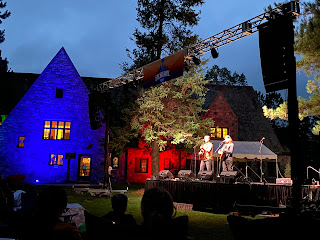 Storyhill hasn't released an album of new songs (not counting their gorgeous 2020 holiday album Bethlehem) since 2010, and they have quite a few new songs they've been performing since they, which I believe they're in the process of recording and I hope they'll release soon. They've broken up or gone on hiatus several times during the last 30+ years, but they just can't quit each other, and their fans won't let them. Throughout the pandemic, and even since returning to in-person shows, Storyhill has been very active with virtual shows, particularly through their Patreon page. Over the winter, they performed almost weekly virtual concerts, which I think they needed almost as much as we did. They'll be back in the Twin Cities to perform Bethlehem (plus a few other songs) at the Fitzgerald in December. 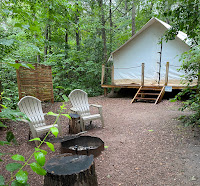 This year, instead of staying on festival grounds, I stayed at Cuyuna Cove Resort in Crosby, just a 15-minute drive away. They just opened in 2020, so everything is new and cute, with thoughtful attention to every detail. They have 5 one-room cabins (which I hope to visit this winter), as well as 5 glamping tents, where I stayed this time. Super cozy and comfortable, with a queen-sized bed, coffee maker, fan, white noise machine, outdoor hammock and fire pit, cooking gear, games, and a beautiful shared bathroom with flush toilets and fabulous showers. It's within walking distance of downtown Crosby with its many shops and restaurants, and Cuyuna Country State Recreation Area, with many miles of trails for hiking, biking, skiing, snowshoeing, etc. It was a wonderful and comfortable complement to my weekend of music, adding a respite of quiet and nature.

As Edie Carey said about Storyhill Fest, "it's freaking magical here." When even the artists are thrilled to be there, and come out to the lakeside campfire where the greatest magic is created, trading songs around the fire in the crisp still night, you know it's a good festival. It'll be back again someday, and in the meantime, I have a new playlist of music to get me through to the next Storyhill Fest. 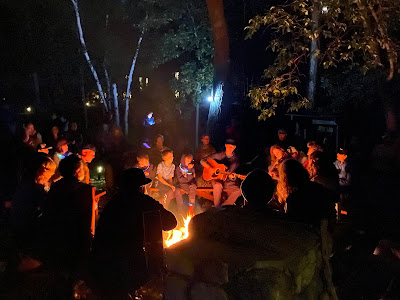