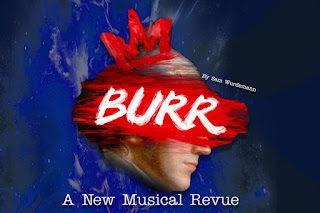 Summary: A follow-up to Hamilton, in which the man who killed him in a duel, Aaron Burr, is the center of the story.

Highlights: If anyone's counting, this incredibly ambitious show with a clever concept probably contains the most words of any Fringe show, much like its inspiration. Also like its inspiration, it's mostly sung-through, with a score that includes rap and fast clever lyrics, perhaps veering more into musical theater / pop than straight R&B and hip-hop. The real Aaron Burr's post-Hamilton story is incredibly complex, including being tried for treason for attempting to create a new nation under his rule in the West. This show condenses all of that into under an hour, including his relationship with his beloved daughter (sing it with me) Theodosia, and paints a portrait of a complex and fallible man who may have let his ambitions get the better of him, but not without pain and regret. Dressed in smart black and white (with a few splashes of color) period attire, the talented young cast (including Trey Arika as the title character, Tony Peterson, Marie Finch-Koinuma, Zack Cambronne, Reign Allen Knight, Piper Kuehl, and the playwright) is fun to watch as they bring humanity and humor to their roles, many of them real people. They are unfortunately singing to a recorded track, rather than a live musician or two, but they keep up with it well and even throw in a little choreography. A few dropped lines (out of hundreds or thousands flying by at rapid pace) and occasional sound issues aside, this is a successful foray into Hamilton follow-up territory, which is exactly the kind of thing Fringe is for.
Read all of my Fringe mini-reviews here.