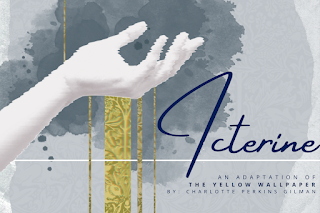 Summary: An exploration of Charlotte Perkins Gilman's short story "The Yellow Wallpaper" using movement and music (icterine is a shade of yellow, particularly as it relates to birds).

Highlights: It might help to have some familiarity with the source before seeing this show - the early feminist short story about a woman diagnosed with "hysteria" after the birth of her son, that criticizes the late 19th Century medical profession, as well as the oppression of women and strict gender roles. In this incarnation of the story, the woman (Nora King) spends a lot of time alone in her room, and interacting with the nanny (Sarah Shoemaker) who is taking care of her son. Rather than a linear narrative, the piece uses movement and music (live singing and recorded instrumental music) to express the themes of the story, and incorporates some of the author's other writings. It's oddly mesmerizing as as the cast brings great emotion to the story through interpretive dance. There's no curtain call, leaving the audience without any closure, but with encouragement to discuss, write a letter to your future self, and "give yourself empowerment and love."