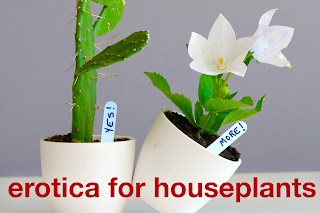 Highlights: Tom Reed, master of the Fringe solo show, said this was the silliest concept he could think of that just made him laugh. And it makes the audience laugh too. Standing at a microphone and reading from a music stand, surrounded by real plants (including those brought in by the audience, because houseplants get to have fun and go places too), he speaks congenially to the audience, introducing the pieces. They include a continuing story about a plant orgy, a love story between an annual and a perennial, a man enjoying eating corn on the cob a little too much, the double entendres found in gardening magazines, a bee on the hunt for nectar and pollen, and a few songs, including the story of a pine and a cactus in love set to the tune of "All of Me." Tom also shows off his improv skills when he interviews some of the plants that came to the show. The whole thing is silly, and funny, and fully on-concept, with surprisingly enough material to fill up a whole show. This is something you could really only experience at Fringe.
Read all of my Fringe mini-reviews here.