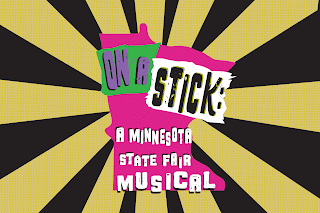 Title: On a Stick: A Minnesota State Fair Musical

Summary: A disgruntled and wealthy Minnesota ex-pat tries to buy the Minnesota State Fair but is thwarted by a local band who reluctantly enters the amateur talent competition and somehow saves the day.

Highlights: This isn't my favorite creation from Literally Entertainment (see The Scranton Strangler and Gilligan), but it's a lot of fun. The kinda ridiculous plot involves a local band in need of a break who goes to the Fair with flyers to try to get people to come see them play at Harry's bar, and instead finds themselves playing in the talent competition, despite lead singer Meg's (Sarah Frazier) protestations that she hates the State Fair (eventually revealed to be due to a childhood talent competition trauma). And somehow they get tangled up in the delightfully evil Richard Effinghead's (Kaz Fawkes) scheme to destroy the Fair. A bunch of stuff happens, but of course our friends end up on top, with the help of a magical cookie fairy named Sweet Martha (Shell Wolfe, who almost steals the show). As you'd expect it's chock full of local references, specifically to our great get-together (nobody hates the State Fair!), a celebration of all things Minnesota, as well as the power of music and friendship. Written by the Literally team of Kyle DeGoey (music and lyrics) and Travis Carpenter (book), the show features live music by Lindsey DeGoey on piano, in addition to several cast members playing in the band onstage. This one may not be their most clever or original musical, but it's a fun and Fringey good time.
Read all of my Fringe mini-reviews here.