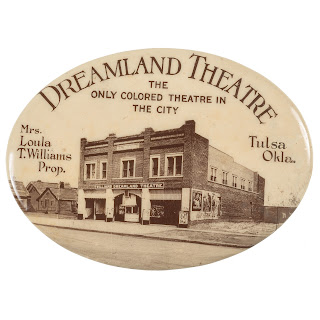 Summary: A reenactment of what happened inside the Dreamland Theatre during the 1921 Tulsa Race Massacre.

Highlights: Like most White Americans, I only heard about this gross injustice in recent years (specifically through the HBO series Watchmen). This show doesn't try to tell you what happened on that tragic day, rather it makes you feel what happened. From the moment the show starts, the audience is immersed in the thriving Black community, gathered for a night out at the movies with friends and family. We see people entering and greeting each other, and then settling in beside us to watch the previews (cast includes Charla Marie Bailey, Dante Pirtle, Quintin Brown, Camrin King, B.E. Kerian, Kari Elizabeth Godfrey, Mike Galvan, and Emmanuel L. Woods). Clips from historical Black films from the early 20th Century (another thing I didn't know about) are played on the big screen, while the cast reacts to them and chats with each other. Even though I knew what was coming, I almost forgot about it as I enjoyed the show. Which made the eventual interruption with news of a probable lynching and ensuing violence even more shocking. The sounds of the massacre overwhelm the space, as a video reenactment of the events happening just outside the theater where we were virtually sitting plays on the screen. The visceral experience gets into your heart and gut in a way that a documentary or narrative drama could not. This show gives the audience a tiny glimpse into what the victims of that night felt, which can only spur one on to learn more about what happened, and do what we can to prevent racial violence and make reparations to its many victims all over this country.