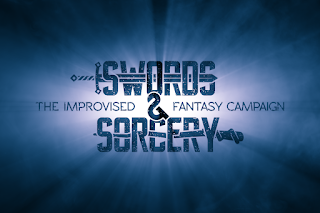 By: The Bearded Company
Location: Theatre in the Round

Highlights: I don't know anything about D&D, but I love what this crew does with it (I suspect that any real game wouldn't be as fun as this). I first saw this show back in the 2017 Fringe, and then again in 2018. In the last few years the Bearded Company has come out with a podcast with a similar concept, called Break the Dice, which is entertaining to listen to, but I forgot how much fun it is to watch them do their thing in person. The physicality of the improvised story adds a whole new element, as they twist their bodies to embody various creatures, and enact slow-mo fight scenes. The premise is fairly simple: guided by game master Allen Voigt, a rotating cast of improvisors (Maria Bartholdi, Laura Berger, MJ Marsh, Tyler Michaels King, Tyler Mills, Joe Rapp, Chris Rodriguez, and Lucas Vonasek) tell a story of druids, elves, dwarves, and other magical creatures. They explore and fight, occasionally asking Allen to roll the dice to determine the success of a move they want to make, whether it's persuade someone, or slash at them with a dagger. Musician Jack Barrett provides a score and soundscape so seamless and appropriate it's hard to believe it's improvised, while Ryan Klima provides sound and lighting effects to add to the story. After many years of experience, this team has become experts at this unique form of storytelling, seeming to read each other's minds as they create a story on the fly. The only bad thing about the show is that it's one continuing story, so we're left with a cliffhanger at the end of the show, which makes me want to go back and see it again!
Read all of my Fringe mini-reviews here.