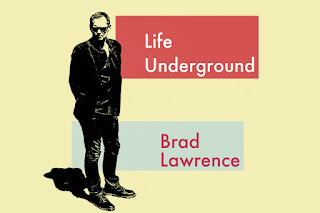 Summary: A solo storytelling piece about living in NYC, the wonder of the subway system, going deaf, and maintaining connection with the world.

Highlights: I love NYC, and I love the subway system. It'll take you anywhere you need to go in the greatest city in the world, and observing your fellow riders is like experiencing a microcosm of the world at large. Brad Lawrence also loves the subway, and he actually lives there and rides it regularly. In this very personal and personable show, he tells some fun and funny stories about moving to the city for a girlfriend and an acting career (one worked out better than the other), working as a mover which allowed him to see inside the lives and apartments of New Yorkers, and funny subway encounters (pro tip: if there's only one empty car on a train, do NOT get on it). He maintains his conversational tone, looking the audience right in the eye in the intimate space of the Augburg Studio, as the topics turn a little more serious. It was on the subway where he noticed the worsening hearing in one ear, and debilitating bouts of vertigo (as some with motion sickness, I can in some small way relate to the latter). He also opens up about his fears about going deaf, namely that he'll lose connection with the world around him. But I'm not worried about that for him, as this very funny, very real, very human show is the epitome of connection through storytelling.