"God of Carnage" by Dark and Stormy Productions at Gremlin Theatre 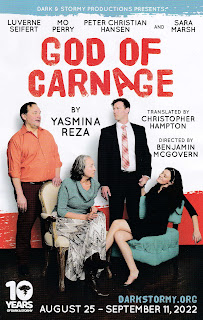 For their 10th anniversary season, Dark and Stormy Productions is trying something new - performing in an actual theater, rather than the Northeast Minneapolis studio space that was their home for five years pre-pandemic, or a number of other found spaces (most recently - in a jacuzzi in Stillwater). But what hasn't changed is their tradition of doing one-act, small-cast, darkly funny plays, and God of Carnage is one of the best of that sort. The 2009 Tony-winning best play was first seen in #TCTheater at the Guthrie, when I called it "a tightly wound, intense, darkly hilarious four-person play about what happens when our baser natures come to the surface." Lyric Arts did it several years later, and now it's a perfect fit for Dark and Stormy. Since the theater space they chose is the Gremlin Theatre, it still has that intimate up-close-and-personal feel (if you're in the front row you may want to duck at a few moments). The sharply written four-person play is perfectly cast with some of #TCTheater's best actors, which makes for a very entertaining evening. Pair it with libations from Lake Monster Brewing next door and food from their rotating schedule of food trucks, enjoyed on their outdoor patio, and you have a practically perfect late summer night out (continuing through September 11).

God of Carnage plays out in real time over 90 minutes or so in the Brooklyn apartment of Veronica and Michael. They have invited another couple, Annette and Alan, over for a civilized discussion after an altercation between their sons. It seems the latter's son hit the former's son in the face with a stick, knocking out two of his teeth. They meet to discuss what to do about it and how to resolve the situation. But of course it's not really about the children, it's about the parents, and as the time goes on (and coffee gives way to rum) they each let down their pleasant company facade and let the truth fly with all the ugliness that often entails. Conflicting parenting styles and world views collide, as alliances between the four are made and broken. Needless to say, they don't ever get around to solving their children's problem, and instead find they have even bigger problems to deal with. The reason this "people behaving badly" play works is that each of the characters has humanity and depth, so that maybe you can empathize with one or more of them, even as you're horrified by their words or actions. Because being human is messy, and most of us don't have things figured out as much as we pretend to.*

The eclectic pre-show playlist leads right up into the start of the show; the music gets louder, the cast comes onstage as if entering this little living room meeting, the music ends abruptly, and the conversation begins. The tension builds nicely under director Benjamin McGovern, with awkward pauses and other moments of impeccable timing. Artistic Director Sara Marsh plays Annette, polite and proper but getting visually more upset with her husband and the situation, with some fun and wild drunken moments towards the end. Peter Christian Hansen plays her smarmy lawyer husband Alan with just the right amount of callousness and bravado. Mo Perry is the art- and history-loving Veronica who tries to keep things on the moral high ground but has a delicious emotional meltdown. Last but not least, Luverne Seifert (who never fails to crack me up), is the good natured (but also kinda jerky) "Neanderthal" Michael. This cast plays and works well together with prickly chemistry all around.

Gremlin's thrust performance space is well used, with a couch, coffee table, and chairs in the center, bar in one corner, cabinet in the other, and the actors using all of the available space. Character appropriate clothing includes classic business attire for Alan and Annette (complete with outerwear), and more of a casual chic look for Veronica and Michael (scenic design by Rick Polenek, costume design by Sara Marsh).

God of Carnage is the kind of play that makes a person glad they don't have a spouse or children, and those who do might just relate a little too well to the shenanigans. It's a little scary to think that this play premiered 13 years ago, considering how much our civility and ability to have reasonable conversations have declined since then. The "God of Carnage" certainly seems to still rule supreme, especially in politics and social media. But maybe seeing it in the extreme, and laughing at it, helps.

God of Carnage plays Wednesdays through Sundays at Gremlin Theatre in St. Paul through September 11.

*Plot summary borrowed from what I wrote about the 2018 production at Lyric Arts.