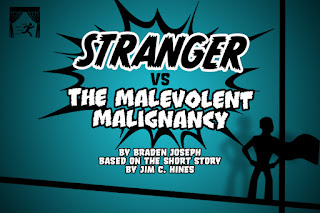 Title: Stranger vs The Malevolent Malignancy

By: The Feral Theatre Company

Summary: A superhero story about what happens when the superhero has cancer and is suddenly mortal like the rest of us.

Highlights: This riff on the superhero story employs all of the tropes we love - saving the world, fighting evil, hidden identity, falling in love with the eager reporter - and adds a new twist. The story is told through a meeting of the superhero known as Stranger (Shain Longbehn) with his therapist Dr. Jarhead (Calista Robinson manipulating a large jar with a head in it, crawling around on surfaces with spider legs). The twist is that Stranger has malignant tumors in his bowels (voiced by Daniel "DK" Konold just off stage, like a devil on his shoulder). Stranger tells his story and we see flashbacks of his life leading up to this point, and a decision he has to make about whether to save himself, or save the world. Classic hero stuff. The cast (also including Teddy Lee, Eliana Meyerowitz, and Olivia Dubiel) is fully committed to the concept, and the script is full of references to science fiction and pop culture. A fun and clever whirlwind of a tale with some poignant rumination on mortality thrown in.
Read all of my Fringe mini-reviews here.