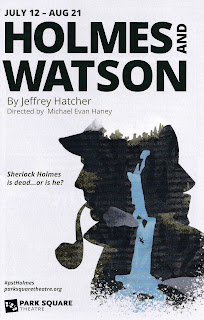 For the first time since 2019, Park Square Theatre's summer mystery tradition continues! (Not counting 2020's utterly delightful virtual zoom mystery play Puzzle Riddle Plot.) I'm not sure I can tell you much about Holmes and Watson without giving it away; it's one of the most surprisingly twisty tales I've seen on stage. But it's enough to know that it's well plotted, well written, deliciously acted, stunningly designed, and features one of the most beloved characters in literature, TV, and film - the epitome of the clever detective, Sherlock Holmes. Or rather, three of them. The rest you'll have to discover for yourself on Park Square's main stage in the Historic Hamm building in downtown St. Paul through August 21.
The premise is this: three years after Sherlock Holmes' infamous supposed death at Reichenbach Falls in Switzerland (a fictional story but a real location - I've been there), his friend and partner Dr. Watson is called to an asylum on a remote island in Scotland where three men claiming to be Holmes are being kept. Watson is asked to identify Holmes for the asylum's Dr. Evans, even though Evans won't tell Watson the circumstances around their arrival or self-identification as Sherlock. All three of the men insist that they are the real detective, except for the one that's in a nearly catatonic state and has to be hypnotized into revealing his story. They all have explanations of why they're not dead and what they're doing there, and eventually Dr. Evans explains that it has something to do with a mysterious woman found wandering the moors. From there various theories, stories, and facts emerge until the true identity of Sherlock Holmes is revealed, to the audience's great surprise and delight, with lots of oohs, aahs, laughter, and open mouths.
Director Michael Evan Haney keeps Jeffrey Hatcher's smart, succinct, and clever script moving at a crisp 90 minutes, the tension building to the thrilling reveal. The fantastic cast includes Paul de Cordova, Pearce Bunting, and Peter Simmons as the potential Sherlocks, all so different but each making a compelling case for being the real one - Paul the more traditional portrayal of Sherlock, Pearce a desperate and unhinged Sherlock, and Peter a silent and mysterious one. Bruce Roach is an excellent Watson, confident and curious. The role of Dr. Evans was performed by understudy Jeffery Goodson when I saw the play, and he was just wonderful, fitting in seamlessly with the rest of the cast, which also includes Peter Christian Hansen and Kirby Bennett as the orderly and matron of the asylum, along with other roles.
All elements of design combine to create a creepy dark island asylum feel. The set looks like a dungeon made of stones, with wooden stairs, scaffolding, and platforms. It's split down the middle to represent the falls, where we see Sherlock's "death" reenacted in several different ways. Sound and lighting design combine to create some very realistic and startling effects of thunder and lightning, as well as other creepy and suspenseful moments. The cast are dressed in detailed and layered period clothing, the highlight being the real Sherlock's multi-colored floor length velvet smoking jacket - a stunner. (Set design by Erik Paulson, sound design by Montana Johnson, lighting design by Mary Shabatura, and costume design by Matthew LeFebvre.)
Park Square's summer mystery is a fun and popular tradition, and it's great to return to it. Holmes and Watson presents 90 minutes of thoroughly engaging mystery full of delightful surprises, cleverly written and perfectly executed by the cast and creative team. Click here for info and tickets, and then get ready for Park Square's 2022-2023 season, which begins with the regional premiere of the 2016 Tony winning best play The Humans and concludes with another Jeffrey Hatcher Sherlock Holmes mystery next summer, with plenty of comedy, drama, and collaboration in between.