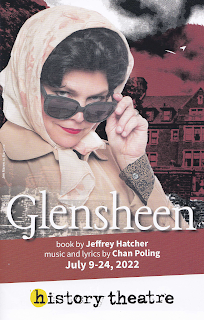 Seven years after its premiere, History Theatre's original musical Glensheen (based on the tragic and bizarre murder of one of Minnesota's most famous heiresses) is still going strong! What has become an annual event took a pause during the pandemic, and returned this year with a tour through Minnesota and a three-week stint in St. Paul. I saw it last night for the third time, and was once again impressed by this wholly local creation. Playwright Jeffrey Hatcher's script is so clever and witty (you can also catch his Sherlock Holmes mystery play at Park Square just a few blocks away), local musician Chan Poling's score is so catchy and fun (original cast recording available at concessions), and this seven-person ensemble is so talented in bringing it to life; I don't know how many times they've done this show (five of the original cast members have returned), but they still make it exciting and heart-felt and playful every time. You have one more week to visit Glensheen, site of Minnesota's most famous true crime case (which bears more than a few similarities to 2004 documentary and recent HBO series The Staircase). Click here for tickets, and keep reading for my review from the 2015 production (with a few updates):
Americans love a good true crime story. And truth doesn't come any stranger than the story of the elderly heiress and her nurse who were murdered in Duluth's most famous mansion. The murder weapons: a silk pillow and a candlestick. The murder location: the old woman's bed and the grand staircase, where a violent struggle occurred. The prime suspect: the heiress' son-in-law, allegedly acting out the wishes of her daughter who was desperate for money to feed her insane spending habits. The key evidence: an envelope mailed to the son-in-law from Duluth containing a valuable stolen coin. The result of two of the most sensational criminal trials in Minnesota history: both suspects go free, one to later commit suicide, the other to leave a string of suspicious deaths and fires in her wake. I mean really, you cannot make this stuff up. Truth is indeed stranger than fiction. What better subject for a new musical at the History Theatre, known for developing new work that explores important events in Minnesota history? This bizarrely fascinating story practically writes itself, so when talented and prolific Minnesota playwright Jeffrey Hatcher applies his biting and clever wit to the story, along with songs from the famed Minnesota musician Chan Poling of The Suburbs and The New Standards, what you get is dark comedy-musical gold. The potential was there at the reading of the new musical last year as part of History Theatre's annual "Raw Stages" festival, and it's a pleasure to see how that potential has blossomed into a fully formed piece of music-theater. It's dark and delicious, hilarious and musically entertaining, poignant and tragic.
If you're not familiar with the story of Chester Congdon, the East Coast lawyer who very wisely invested in iron ore in late 19th Century Duluth, you should visit the grand estate on Lake Superior that he built for his family (wife Clara and seven children) and left to the University of Minnesota - Duluth upon the death of his last child. Which happened to be his youngest daughter Elisabeth, who never married and lived at Glensheen her entire life, adopting two daughters with whom to share her life, love, and fortune. It's her daughter Marjorie (named for Elisabeth's beloved older sister) upon whom this little tale hinges. Diagnosed a sociopath as a teenager, Marjorie had an insatiable spending habit that put her in constant debt and eventually, allegedly, led her to convince her second husband Roger Caldwell to kill her mother in order to receive her inheritance. The details of the story are too strange to be believed, except, of course, that it's true.

The musical begins on a modern-day tour of the historic Glensheen mansion. The people on the tour
become a little too curious about the famous staircase and the tour guide tries to steer them towards the architecture of the house, but to no avail. This fabulous cast of seven then leads us on a tour of bizarre and tragic life of Marjorie and those around her. The musical stays fairly close to the facts of the case, although of course some is conjecture or rearranging to make a compelling story. But don't worry, at the end of the show they tell us exactly what was made up and what wasn't.* It's all very tongue-in-cheek and darkly comedic, done in the heightened reality style of musicals, but with some grounded and poignant moments that remind us these were real people who suffered great tragedy. The tone walks the fine line of being campy, funny, and outrageous, while not disrespectful to the lives that were lost. The show engenders sympathy not just for the two women who died that night, but also Marjorie's husband Roger, who certainly didn't know what he was getting into when he married her, and perhaps even Marjorie herself. Perhaps.

Highlights of the show are many, including:
Glensheen is a fantastic new original musical, based on one of the most fascinating true crime stories in Minnesota history. It's a sordid and epic tale just ripe for some kind of theatrical treatment, and Jeffrey Hatcher and Chan Poling have given it just the right kind. A dark and campy musical about a stranger than fiction true crime story? Yes, please! (Playing through July 24.)

*If this story fascinates you as much as it does me, I highly recommend the book Will to Murder, written by former Duluth crime reporter Gail Feichtinger with input from the lead investigator and prosecutor, so it's chock full of details and evidence.