"Emma" at the Guthrie Theater 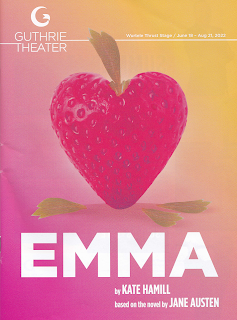 It's summer at the Guthrie, and there's a big fun show on the thrust stage for the first time since 2019 - a world premiere new adaptation of Jane Austen's Emma. Playwright Kate Hamill is adapting all of Austen's works for the stage; Emma is her fourth and was commissioned by the Guthrie Theater, its 2020 premiere postponed two years due to the pandemic. But somehow, now seems just the right time for what is my favorite Kate Hamill play to date. All of her adaptations are true to the source but bring something fresh, modern, and feminist to the story. The themes of Austen's work are timeless, stories of smart young women determining their own destiny despite societal limitations, and Kate makes these themes even more relatable to a modern audience. Emma strikes the perfect balance between the source material, modern social relevance, and delightful silliness; a summer confection as delicious and juicy as the red ripe strawberry on the cover of the program. See it now through August 21.
The Emma in question is one Emma Woodhouse, an educated young woman of a certain standing who has nothing to do with all of her talents and knowledge, because the highest goal of a woman in her situation is to marry well. So she turns all of her ambitions into matchmaking for friends and neighbors, whether they like it or not. After successfully setting up her beloved governess Anne with a wealthy man of the neighborhood, she turns her sights to Harriet, who she believes can do much better than the groundskeeper she's crushing on. This match proves to be a bit more elusive, with mishaps and miscommunications along the way that involve the dashing Mr. Churchill, the perfect Jane Fairfax, and Emma's neighbor and frenemy Mr. Knightley, who may just be the perfect match for her, if she could only see it.
The playwright employs the device of direct audience address and fourth wall breaking to charming effect. Emma talks directly to us, often addressing us as "Guthrie Theater audience," chastising us for not warning her of what we knew was coming if we read the novel. It's quite endearing and makes us feel like Emma's confidantes, and imbues the whole affair with a fun and playful spirit. Amelia Pedlow (previously seen at the G in Frankenstein) couldn't be more charming, natural, funny, and personable in the role, making us root for her even when she's making bad choices. She's well matched in Carman Lacivita as her sparring partner/eventual suitor Knightley. David Kelly (whom you might recognize from Harvey) plays both Emma's befuddled father and Anne's new husband, two such distinct performances I didn't realize it was the same actor until I looked at the program during intermission. The talented cast also includes Samantha Steinmetz as the adorably awkward Harriet; Brenda Withers as the wise and kind-hearted Anne; Louis Sallan as the vicar who figures into Emma's plans; and #TCTheater's own Sun Mee Chomet in a very funny performance as the cat-loving Miss Bates; Ryan Colbert as Mr. Churchill, entering the stage like a rock star in a leather jacket and super tight pants that had the ladies beside me tittering; Christine Weber as the perfectly perfect Jane Fairfax; and Anna Leverett making her Guthrie debut as the vicar's annoying new wife.
Meredith McDonough previously directed Noises Off and brings that same madcap hilarity to this piece, if a bit more elegant. There are plenty of moments of ridiculous and physical humor, but never at the expense of the story or characters, nicely balanced with more touching moments as Emma has some real moments of self reflection. Pop music from this and the last century accompany the show, which adds to the freshness of the story. Like the play itself, the dancing is a delectable mix of traditional and modern; at one point the party guests line up for what you think is a sweet English country dance, and then start to boogie, all while carrying on a conversation. (Sound design by Palmer Hefferan, movement direction by Emily Michaels King.)
The period costumes are gorgeously rendered by Lex Liang, who also designed the set. The highlight is Emma, naturally, who spends most of the first act in a delicate pink empire waist gown with a beaded hem, made different by the addition of a cape, or a bow, or a hot pink denim jacket shrug with faux fur trim, with onstage changes because she's rarely offstage. All of the women are in gorgeous gowns, the men in handsome suits, all well suited to each character. The set features the grand staircase of a house, with the countryside extending above and beyond it with cute little miniature houses nestled amongst the trees. A settee, or a chair, or cat portraits, or so many big strawberries are whisked smoothly on and off stage.
Now more than ever, we need women's stories told by women. Emma is a really fun and entertaining show, but it also has depth, commenting on women's rights and roles in 19th Century England and 21st Century America. The play was already in production when the Supreme Court took women's rights back nearly 50 years, making Emma's themes of women's occupations, women's autonomy, and women's choices even more painfully relevant. This is how you take a beloved classic and make it speak to today in an accessible and entertaining way.
Emma continues at the Guthrie Theater through August 21.